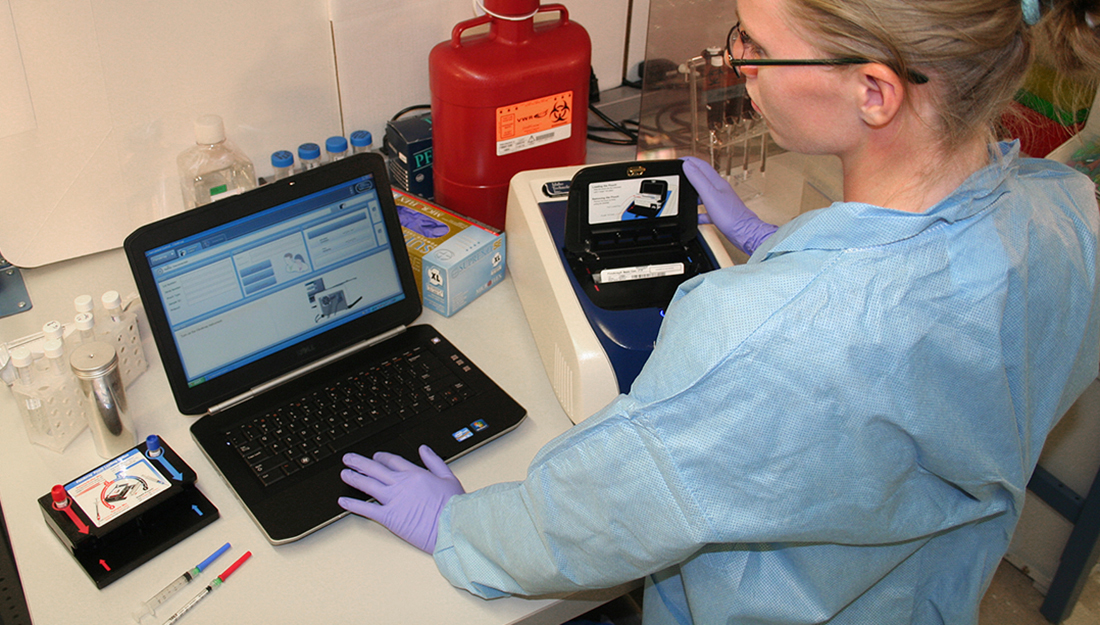 A diagnostic tool for viral and bacterial pathogens

Making the correct diagnosis is difficult when multiple infectious agents can cause the same syndrome, but for Carrie L. Byington, MD, a pediatric infectious diseases specialist and the dean of the Texas A&M College of Medicine, it’s also one of the most pressing issues in the field of infectious diseases.

“Determining the cause of a fever, for example, is one of the most common problems in pediatric infectious diseases. Even though in the vast majority of cases, the cause of the fever is a self-limited viral infection, there’s always that unsettling possibility that the fever is due to life-threatening bacteria, virus, fungus or even parasite. Being able to rapidly distinguish the benign from the deadly was a long-standing goal that I knew if realized would really transform the health care landscape,” said Byington, who helped develop a diagnostic system called FilmArray with BioFire Diagnostics in Salt Lake City, Utah, to do just that.

“When I became involved, a test that could distinguish bacteria, viruses, fungi and parasites simultaneously had never really been created before,” Byington added. Now, FilmArray, with panels that can be used to identify almost 100 different pathogens is used in thousands of hospitals in North America and all over the world to diagnose causes of fever, respiratory or gastrointestinal illnesses, and even meningitis or sepsis. All of this testing can be completed within an hour. Traditional testing that was common just a few years ago could take days to evaluate for multiple pathogens and often was not performed because it was too time consuming or expensive.

Byington, a clinician scientist, collaborated with a group of laboratory scientists and engineers to create a tool that would meet the needs of the practicing physician. Importantly, she understood the way physicians approach patients. “In practice, when an ill patient comes in for evaluation, you can’t do one test, wait for the results, then do another test, and so on,” Byington said. “You need to make decisions quickly and physicians will make these decisions with or without diagnostic data. Having data quickly helps us make better decisions, especially regarding issues related to antibiotic administration or admission to the hospital.”

Knowing the causative agent of an illness is extremely important to the treatment. For example, an infection caused by bacteria can be treated with antibiotics, and some viruses, like influenza, can be treated with antiviral agents. Even when there is no specific therapy for viruses, knowing the cause of the illness can be reassuring and unnecessary treatments, especially antibiotics, can be avoided. “If you admit someone to the hospital and treat them with antibiotics, when actually all they have is a relatively common virus that their own immune system would fight off in a few days, you’re not only wasting resources, you could be doing real harm, like contributing to antimicrobial resistance.”

The FilmArray, which was developed initially in response to the SARS epidemic, is also useful when the test is negative. “Being able to distinguish SARS or any other new bug from more common viruses or bacteria is vital if we want to be able to stop pandemics,” Byington said. “During development, we predicted that physicians examining a critically ill patient who has a FIlmArray test that is negative for the most common bugs will consider a new or emerging pathogen.”

This has happened twice so far. During FilmArray’s testing period, it helped pick up the H1N1 pandemic, and once it was licensed for use, it helped identify the enterovirus D68 outbreak of 2015. “It actually is working the way we hoped it would work,” Byington said. “Testing has really made a difference.”

FilmArray is small enough to sit on a desktop and only requires about five minutes of hands-on time. It then uses a highly multiplexed polymerase chain reaction (PCR) to detect the pathogens and gives the result in about an hour. The pouches for each panel were created to be shelf-stable and to not require refrigeration, opening up many possibilities for using the test in areas with fewer resources.

Next, the FilmArray team is working on a fever identification panel for returning travelers. “It will be able to determine, for example, whether the cause of fever is salmonella or malaria,” Byington said. “These infections have very different treatments.” The fever panel was used during the 2016 Olympic and Paralympic games to help with the clinical care of the athletes and staff.

“It’s amazing to actually see something that I worked on become a tool available in hospitals and research labs all over the world,” Byington said. “My experience with the FilmArray is one of the reasons that I’m so committed to the engineering medicine (EnMED) program at Texas A&M. When we bring together basic scientists, clinicians and engineers to work with our students, new technologies will be created that can only be imagined today. I can’t wait for tomorrow and the impact these students will have on the health of our nation.”