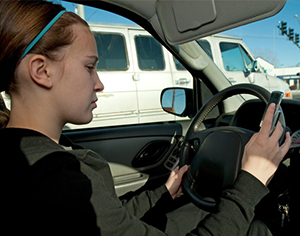 Although not all states have laws restricting texting while driving, a recent study by Alva Ferdinand, DrPH, JD, assistant professor at the Texas A&M Health Science Center School of Public Health, indicates if they did, it would save lives.

Ferdinand, who is in the Department of Health Policy and Management, used a panel study design that examined the effects of different types of texting bans on motor vehicular fatalities. She and her co-researchers used the Fatality Analysis Reporting System—a nationwide census providing the National Highway Traffic Safety Administration, Congress, and the public with data regarding fatal injuries suffered in motor vehicle crashes. A difference-in-differences empirical approach was used to examine the incidence of fatal crashes between 2000 through 2010 in 48 U.S. states with and without texting bans. Age cohorts were constructed to examine the impact of these bans on age-specific traffic fatalities.

Results indicated that primarily enforced texting bans (i.e., a police officer can stop a driver for texting while driving without having another reason) were significantly associated with a 3 percent reduction in traffic fatalities among all age groups. This equates to an average of 19 deaths prevented per year in states with such bans. Further, primarily enforced texting laws that banned only young drivers were the most effective at reducing deaths among the 15-21 year old cohort. Secondarily enforced texting restrictions (i.e., a police officer can only cite a driver for texting after stopping them for some other violation, such as speeding, driving while intoxicated, etc.) were not associated with traffic fatality reductions in any of their analyses.

“Our results indicate that states that have not enacted any primarily enforced texting bans are missing out on opportunities to prevent avoidable roadway deaths,” said Ferdinand.

“Impact of Texting Laws on Motor Vehicular Fatalities in the United States,” was published online in June in the American Journal of Public Health http://ajph.aphapublications.org/doi/abs/10.2105/AJPH.2014.301894

Adam E. Barry, PhD, FAAHB, has been named head of the newly formed Department of…

POV: How does monkeypox spread?

Monkeypox is caused by a virus that, despite periodic outbreaks, is not thought to spread…

Emergency preparedness should include plans for infectious diseases

Instagram
Rural Texans deserve to have access to quality health care! With a new, $4 million grant from the Health Resources and Services Administration (HRSA), @tamunursing is launching a mobile clinic in rural parts of central Texas this fall.
Q: Who is at risk of getting monkeypox?
Are drones the optimal way to deliver at-home COVID-19 tests?
In extreme heat, take extra precautions to stay safe. ☀️ Drs. McKnight and Williamson from @TAMUmedicine and #TAMUHealth advise you to:
Living against our body clocks is detrimental to our health, even years after returning to a normal schedule.
Happy Independence Day! 🇺🇸

Transformational learning for all students

A news publication of Texas A&M Health, Vital Record offers insight on the latest in health, medicine and scientific discovery from experts across our five schools and numerous centers and institutes.

The information and opinions expressed on this site provide general information relating to health and are not intended to constitute advice or specific recommendations relating to any particular person, ailment, disease or condition or otherwise substitute for a consultation with a qualified medical doctor. Texas A&M Health encourages you to seek the advice of your own health care provider relating to any health concerns.