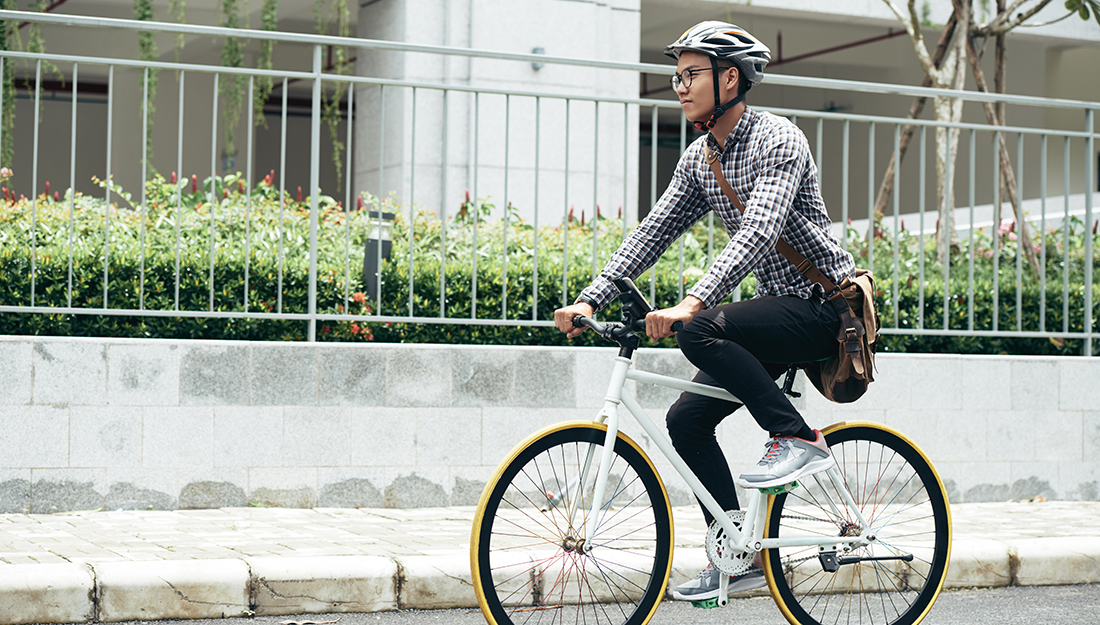 Although not a solution for every person and every trip, bicycling as transportation carries tremendous benefits through reduced pollution, decreased traffic congestion and improved health due to increased physical activity. Over the past two decades, the United States has seen growth in bicycling as transportation, though usage remains low overall. Many cities, including the Texas cities of Austin, Houston and Fort Worth, have implemented bike-share programs in recent years to further promote bicycling as transportation; however, the need for bicycle docking stations and additional infrastructure has been a barrier in some cases. This barrier is being addressed through free-floating bike-share systems that rely on GPS trackers and mobile applications to eliminate the need for docking stations and improve bike-share flexibility.

In a new study, Debra Kellstedt, DrPH, recent graduate of the Texas A&M School of Public Health, and her team evaluated the use of a free-floating bike-share program on the campus of a large public university in Texas. Her dissertation research with J.O. Spengler, JD, Jay Maddock, PhD, and Katie Bradley, MPH, all of the School of Public Health, was recently published in the journal Preventive Medicine Reports.  It examined the bike-share use and factors predicting bike-share adoption and is the first study evaluating free-floating bike-share system use on a university campus.

Free-floating bike-share systems have the advantages of not needing docking stations, which can reduce cost, and providing greater coverage area because bikes can be picked up and dropped off at any location in the area. College campuses are well-suited for bike-share programs because of the need to reduce traffic and address parking needs and the fact that many campuses provide protected roads and pathways. Additionally, setting up bike-share programs on college campuses can serve to promote the benefits of bicycling to young adults. Thus, in 2018 the free-floating bike-share program the research team evaluated was piloted at Texas A&M University with an initial 850 bicycles and more to be added later.

In the study, Kellstedt and colleagues analyzed bicycle GPS tracking data and mobile application use from the bike-share company to determine how many people used the system, how many times the bikes were used and how many total miles were covered by the system’s bicycles. They also analyzed data from an email survey sent to university students, faculty and staff that asked about age, gender, bike-share usage, current bicycle use, cycling confidence, class rank and campus residency. In addition to the GPS and application data and survey results, the researchers conducted focus group sessions with some of the survey respondents to gather details on how they perceived their experiences with the bike-share program.

Kellstedt and colleagues found that in three months, students, faculty and staff had taken more than 160,000 rides totaling nearly 86,000 miles, with average trip distances and times of half a mile and about eight minutes. The statistics showed that more men reported using the bike-share system than women and that the system was more popular with respondents who rode bicycles regularly and felt confident about riding safely on campus. Younger students and those living on campus were also more likely to use the bike-share program; however, the program being strictly limited to the campus’ boundaries could be the reason for this finding.

The focus group revealed that people who used the bike-share program were more positive about the program than those who had not used it. Additionally, focus group participants identified issues with bike safety, bike-share program knowledge, costs and savings and various unintended consequences such as bicycles being left outside of proper areas or taking up limited space in existing bike racks.

“Better communication about how the bike-share program works, including areas that the bicycles are limited to, could improve use and reduce unintended consequences,” Kellstedt said. “Some participants reported incurring extra fees due to leaving the program’s defined area, which could be managed through better communication. Including potential participants in the planning process and further emphasizing the various benefits of bicycling could also improve program adoption.”

This study serves as a starting point for research on bike-share programs on university campuses, though it has some limitations, such as restrictions on data provided by the bike-share company and a lack of data on long-term bike-share program adoption.

“Further research that includes information on the number of rides per day participants take and on whether bike-share programs change transportation habits will be beneficial, as will longer-term studies of bike-share use,” Kellstedt said. “With more information, researchers and policymakers will be able to tailor bike-share programs to better serve the public by giving them access to the many benefits bicycling can provide.”