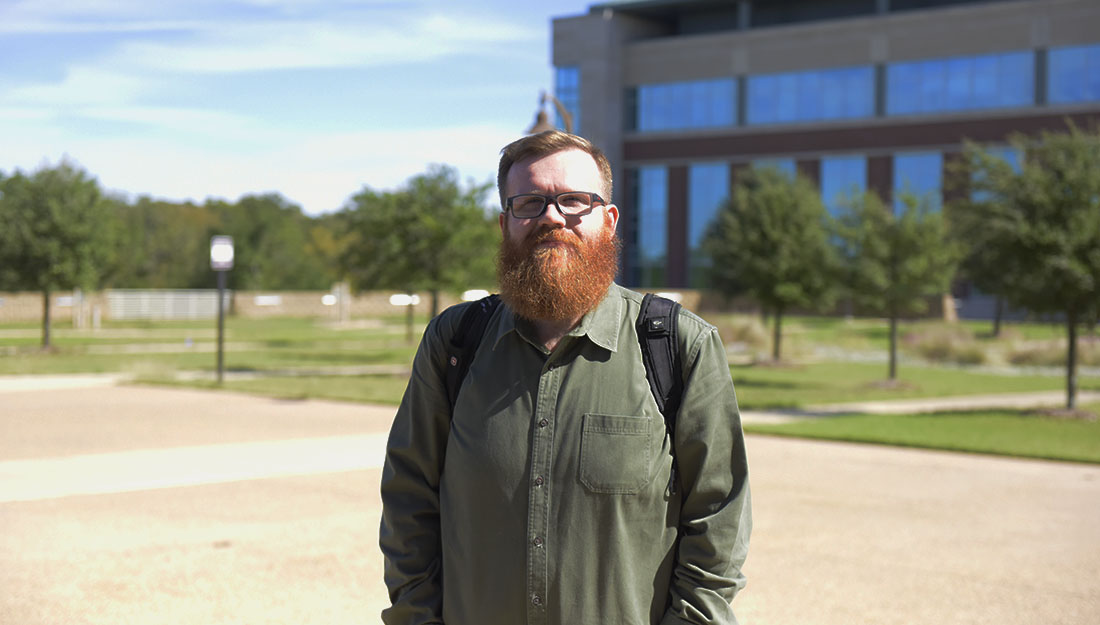 The winding journey of a student in the MD/PhD program at Texas A&M
November 22, 2019

Sporting faded blue jeans and workman’s boots, Liam Guthrie introduced himself with a left-handed handshake; a dog-walking accident had left two fingers on his right hand cocooned in foam splints. On his left side, a twisted ink ladder tattoos his forearm, the DNA strands falling just short of his plaid shirtsleeve. Below his Aggie ballcap sits a pair of black-framed glasses. A thick orange beard spans the bottom half of his face, and nestled in the red forest of facial hair is a welcoming smile.

At first glance, little about Guthrie’s appearance indicates that he studies infectious disease in the MD/PhD program at Texas A&M University.

This rigorous program allows students to receive training in both medicine and research. Because Guthrie plans to work in internal medicine and consult on infectious disease, he tailored the dual program to suit his interests. After his first two years of medical school, Guthrie joined the Sacchettini lab, which is widely recognized for its pharmaceutical research regarding treatment of cancer, malaria and tuberculosis. Working under James Sacchettini, PhD, professor of biochemistry, biophysics and chemistry, Guthrie has juggled several projects, and he plans to complete his PhD in December. To finish the remainder of medical school, Guthrie will complete his clerkships and begin residency in spring 2022.

Having grown up in a low-income, single-parent family, Guthrie thought achieving this level of higher education was unattainable for someone like him. “People have a tendency to ignore disparities against the poor kids,” Guthrie shrugged.

A native of West Texas, Guthrie describes his upbringing as “humble beginnings.” He was born into a family of teachers, with educators in all three preceding generations. Guthrie’s mother, while raising Guthrie and his vision-impaired brother on her own, relocated to a different school district every couple of years in pursuit of better pay. Although the family of three lived a nomadic and modest lifestyle, Guthrie’s mother never faltered in encouraging academic success. “We may not have always had what we wanted, but we had all the necessities,” Guthrie said. “My mother made sure we pursued higher education as a means of advancement out of poverty.”

After graduating from high school, Guthrie enrolled at Midwestern State University on the pre-medical track. Early into his studies, he realized that federal loans and scholarships could bear only so much of the financial burden. To cover the difference, Guthrie worked full time during the semester as a tutor, residence adviser and teaching assistant—on top of all his coursework.

With majors in biology and chemistry and a minor in mathematics, Guthrie had a heavy workload. Still, curious about science outside the classroom and bold enough to test his time-management skills, he began volunteering in a research lab and eventually worked on independent projects. This experience piqued Guthrie’s interest in a career that combines research and medical practice, but first he had to get accepted to medical school.

The Jump to JAMP

Guthrie’s academic dedication made him a competitive applicant. He had the grades, the involvement in academic honor societies and a diverse skillset from his work experience. But aspiring doctors should have clinical exposure as well, and this exposure couldn’t be obtained by acing exams or attending club meetings. “When you go to interviews, you hear, ‘My mom is an anesthesiologist so I got to go to work with her,’ or ‘My uncle is a surgeon and I got to scrub in,’” Guthrie said. “That’s certainly something I never had, that exposure.”

Not only was Guthrie limited by his family ties—or lack thereof—his hometown of Baird, Texas, didn’t even have a permanent full-time physician. How could he shadow a doctor if all of Callahan County was a mere pit stop for a traveling health care service consisting mainly of nurse practitioners? Unlike many of his peers seeking a career in medicine, Guthrie had nearly no opportunities to network.

Through the program, Guthrie completed two internships, shadowing physicians in San Antonio and Houston. Without JAMP, he might have never secured such internships, let alone been able to relocate on his tight budget. “JAMP really changed this mindset I had that I would never be able to afford medical school,” Guthrie said. “JAMP equals the playing field.”

Equal the playing field it did. Guthrie was accepted to the MD/PhD program at Texas A&M and began medical school in fall 2010. Two years later, he began working in the Sacchettini lab on a drug discovery project that Guthrie and his colleagues designed from scratch.

This first project sought to identify drugs that can target specific sites on atypical mycobacteria—bacteria resembling those that cause tuberculosis but that instead cause other diseases. Some people are infected with atypical mycobacteria but never show symptoms, while others develop diseases involving the lungs, lymph nodes or other parts of the body. Antibiotics can wipe out these bacteria, but Guthrie’s work aims to improve the existing treatment method.

In Guthrie’s research, he screened 110,000 small drug-like molecules and then, by assessing the bacteria’s structure, he attempted to identify areas the drugs might be able to attack. In drug development, researchers often use a “guess and check” approach, testing thousands of drugs at various locations on the bacterium. Sometimes a location and the drug match partially; other times the drug and bacterial site are completely incompatible. The goal, of course, is to find a perfect match between drug and target location.

Guthrie found around 300 partially compatible sites on the mycobacteria, which he then sifted through to pinpoint one especially promising location. When Guthrie returns to medical school, his successors can use this finding in future research. “I’ve got the collection made for other graduate students to come in and make the attempt at identifying the target locations,” Guthrie explained. “That collection of molecules is sort of my contribution to the lab.”

Over the past seven years, Guthrie has contributed to numerous projects, but this research is the focus of his dissertation. Because of the long-term nature of working with mycobacteria, which grow very slowly, Guthrie has spent more time on his PhD than expected. “I don’t think I would’ve changed much about my research experience,” Guthrie stated, “but I might have chosen a different organism to work with instead of something that took forever and a day.”

These rewarding albeit grueling years in the lab were made bearable by the positive work environment, according to Guthrie. “Working with Dr. Sacchettini has been quite the experience,” Guthrie said of his supervisor. “We’ve got a lot of resources and once you propose a project to him, he gives you leeway to explore that research and see where it takes you.”

This appreciation is reciprocated by others who have worked in the lab. Gloria Conover, PhD, a former senior research scientist in the Sacchettini lab and now director of medical student research at the College of Medicine, spoke highly of Guthrie as both a student and person. “He’s a very clever individual—creative, resourceful, and he likes to learn,” Conover said. “Guthrie likes to share knowledge for the sake of knowledge and has no problem helping others learn something in the lab.”

Guthrie has also depended on the unwavering support of his family, which he said plays a critical role in his professional endeavors. In addition to his mother and brother, Guthrie’s husband, who works in a daycare center, has been a leading source of encouragement, though not without some harmless teasing. “My husband jokes that I don’t do a lot,” Guthrie said. “But that’s the difference between someone who has to work up a pretty decent sweat at work versus me in the lab.”

Alongside his support systems, the scholarships Guthrie has received motivate him to continue his graduate studies. “When you go through college on scholarship, you really feel a responsibility to give back to the community,” Guthrie said. “If it wasn’t for the generosity of the taxpayers, you wouldn’t be where you are.”

Thanks in part to this financial and emotional support, Guthrie will soon finish his PhD and then his clerkships and begin shopping for a residency program. He is an avid driver and seeking a residency position where he can travel long distances by car. Thus, Guthrie is eyeing programs in locations such as Spokane, Washington, and Rapid City, South Dakota, with rural clinical sites and long commutes.

Eager to turn driving into a vacation, Guthrie has embarked on road trips with his family throughout Mexico and, most recently, the Northwest Territory in Canada. The scenic route has allowed Guthrie to spend time with family and take a break from bacteria, but he did learn a thing or two along the way. When asked if he would have done anything differently, a grin peeked out beneath his orange mustache. “Don’t take a Prius into the Canadian Rockies,” Guthrie chuckled. 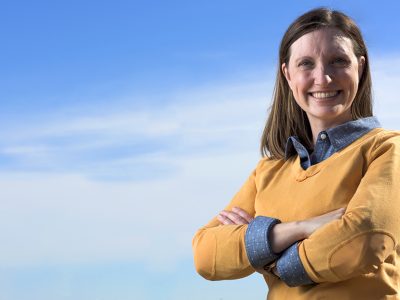