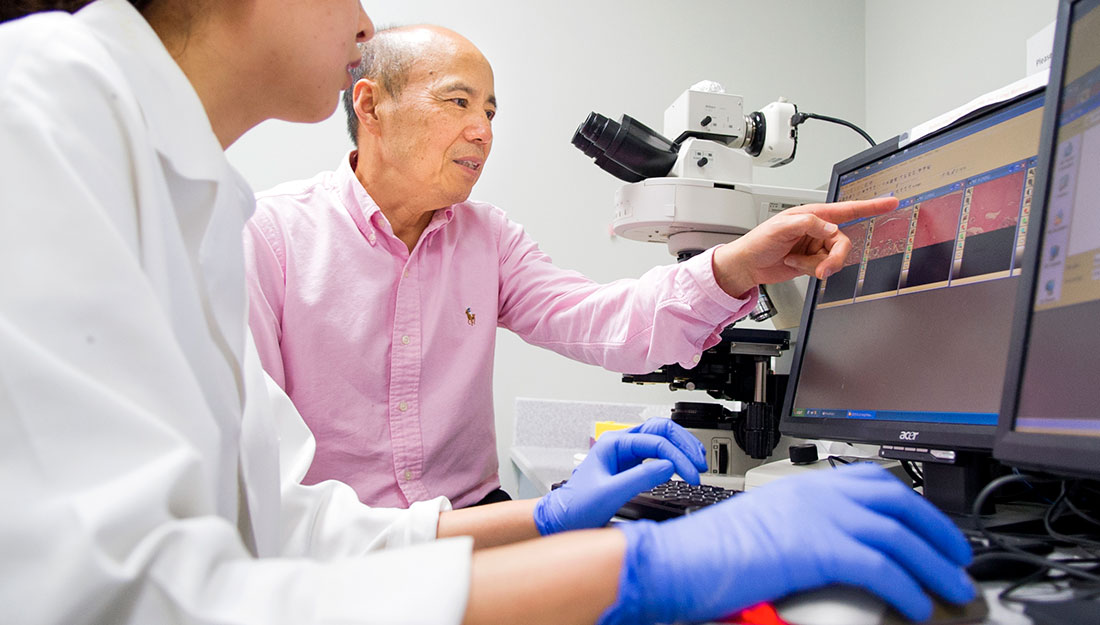 The research stands to impact new therapies for injuries to cartilage, which, unlike bone, cannot repair itself.
September 23, 2015

Findings from researchers at Texas A&M University Baylor College of Dentistry could prove to upend previous dogma on bone formation in the temporomandibular joint.

The current school of thought on bone formation in the mandibular condyle, the rounded knob where the mandible and upper jaw meet, is that cartilage cells — called chondrocytes — must form and then experience cell death before bone cells can form. Findings from the lab of Jerry Feng, Ph.D., M.S., professor in the department of biomedical sciences at TAMBCD, show this may not be the case. Bone marrow cells may not be the only ones that build bone.

“The chondrocytes do not die. They transform into bone,” says Feng. “This is the most exciting part. That’s a big switch. People in this field never thought about such a mechanism.”

The research stands to impact the knowledge base regarding how the temporomandibular joint grows and develops. In turn, this new information could change approaches to treating malocclusions and even have an impact on new therapies for injuries to cartilage, which, unlike bone, cannot repair itself.

Cell lineage tracing on a transgenic mouse model lies at the crux of their hypothesis. In confocal microscopic images, cells tagged with reporter genes reveal the merging of bone and cartilage proteins seen in representative shades of red and green, one for each type of protein.

“The idea is that the cell lineage tracing enables you to follow cartilage cells and see where they end up during growth,” says Robert Hinton, Ph.D., Regents professor emeritus. “You would expect the condylar cartilage cells under the normal theory to end up dying off, but it appears that a number of them are turning into bone cells or potentially forming the walls of blood vessels.”

Hinton has worked with Feng on this research and says the potential for transmitting this cutting-edge research to students is tantalizing, as it creates unique research opportunities for students.

“This is stuff that is not in textbooks right now that can be brought into discussions about how bone is formed from cartilage during growth,” says Hinton.