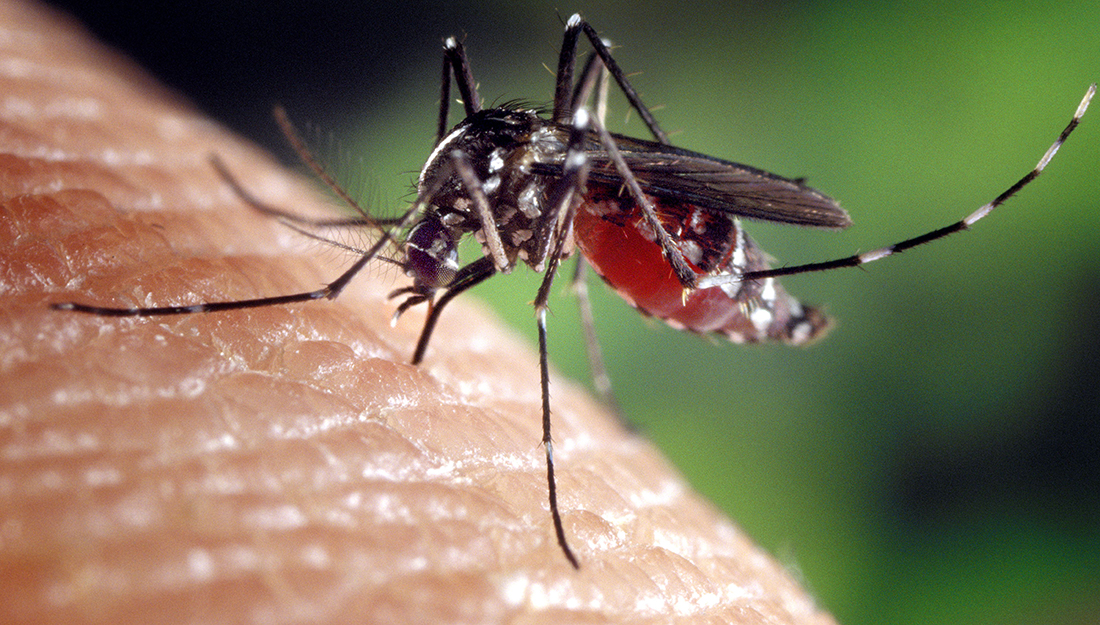 Protecting yourself from insect bites

Bites from insects, such as mosquitoes and ticks, can transmit serious illnesses
September 4, 2018

Bugs are everywhere: in our house, on our pets, on us. The Smithsonian Institution estimates there are 200 million insects for each person on the planet. Most are interested in eating the things we discard, such as that half-eaten banana, or plants in our yard. But other insects want us. They want our blood, to be more precise. As they crawl, jump or feed on us, some of these insects pass along viruses they picked up from infected animals or people. A Texas A&M expert explains what we should know about these disease-carrying bugs and how to avoid insect bites.

As the Texas summer sun sets, creatures awake from a dormant state to feast on your blood. They’re relentless. They’re numerous. And they’re hungry.

They aren’t vampires, though. They’re mosquitoes.

If you contract a vector-borne disease, there’s a chance you won’t have any symptoms. However, many indications of having one of these illnesses are similar to those of the flu.

“If you experience flu-like symptoms such as fever, body aches and chills, see your health care provider,” Mobley said. “Usually it’s just a virus that has to run its course. Occasionally it is more serious.”

While rare, some of the more serious effects of vector-borne diseases include coma, organ damage, becoming disabled from severe joint damage and—for pregnant women infected—giving birth to babies with birth defects and death.

How widespread are West Nile and Zika?

The Centers for Disease Control and Prevention (CDC) says cases of the West Nile virus happen during mosquito season, which begins in the summer and continues into autumn. Only 20 percent of those infected show symptoms, such as rash, fever or body aches. In addition, one person out of about 150 develop West Nile neuroinvasive disease, a serious, sometimes fatal, illness marked by high fever, coma and seizures.

Pregnant women who are bitten by mosquitoes carrying the Zika virus run the risk of giving birth to babies with severe birth defects. Health problems include difficulty with hearing or vision, developmental delays, seizures and microcephaly, a condition where the baby’s head is smaller than normal, often due to abnormal brain development.

The CDC reported 34 cases of the Zika virus in the U.S. this year. Three of those instances were in Texas. In 2017, 55 cases were reported in Texas.

While most Zika virus occurrences are travel-related, Texas is home to the Aedes species of mosquito, the type that carries the West Nile and Zika viruses. Zika can also be contracted through sexual contact.

How can I protect my family from insect bites?

“Since there is no treatment for these viruses, the best course is to avoid mosquito bites,” Mobley said. “Wear long sleeve shirts and long pants and put on insect repellent.” The most effective insect repellant contains the active ingredient DEET.

Mosquitoes lay their eggs in standing water, so it’s best to knock over buckets or other containers that can collect water around your home to keep these insects from multiplying. Even something as small as a bottle cap can harbor mosquito larvae. If you have a birdbath, rain barrel or other large containers of standing water, you can add insecticide tablets with the active ingredient Bacillus thuringiensis subspecies israelensis (Bti). This relatively inexpensive treatment is deadly to mosquito larvae but harmless to other animals.

Fleas and ticks also spread diseases, such as murine typhus, Rocky Mountain spotted fever and Lyme disease. Most of the time, insects transmit diseases to humans or pets after feeding on an infected person or animal.

Severe cases of murine typhus can damage the liver, kidneys, heart, lungs and brain. Those who get Rocky Mountain spotted fever may experience a rash and, left untreated, can suffer from hearing loss, paralysis or mental deficiencies.

You can keep disease-carrying pests from feeding on your pets and coming into your home by treating pets with flea and tick preventatives found at your local pet supply store or veterinarian’s office.

Since most vector-borne diseases common to Texas are asymptomatic, and medical attention treats the symptoms and not the infection itself, the best way to keep safe is to prevent insect bites.

A little time spent applying insect repellant to yourself and family members, or bathing your dog with shampoo that kills fleas and ticks, will keep the itch—and, more importantly, vector-borne diseases and insect bites—away.