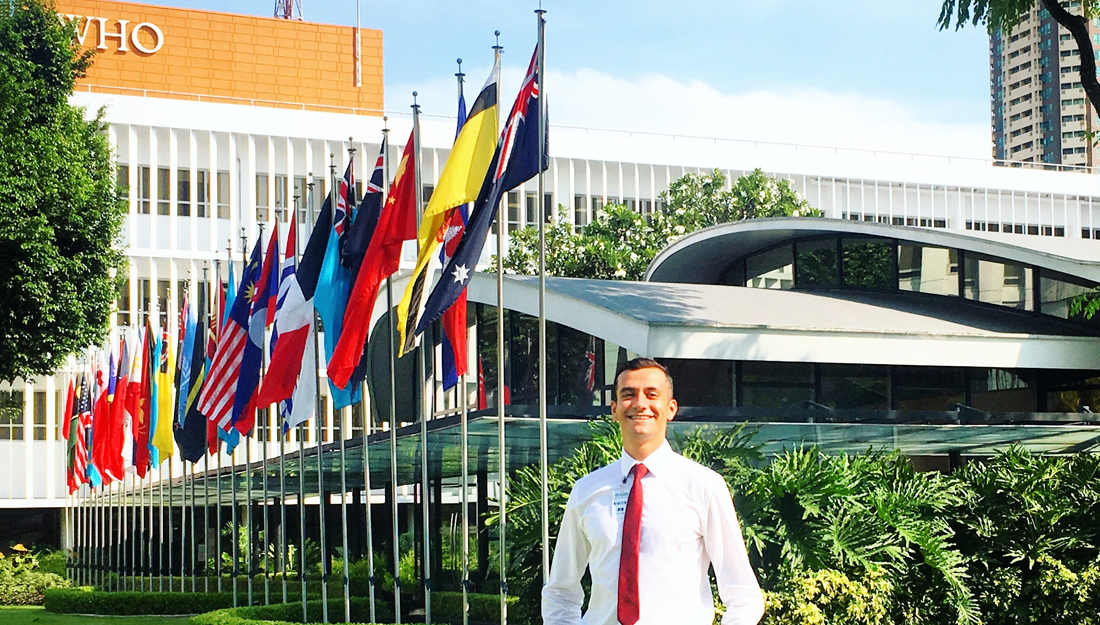 Student has opportunity to intern at World Health Organization

Luis Banuelos, a graduate student at the Texas A&M School of Public Health, spent the few days before the beginning of his practicum sleeping in a hostel in the Philippines while searching for an apartment to rent. As an unpaid intern for a health organization that has its offices overseas, he had to save costs as much as possible—including not renting an apartment until he had arrived, as the apartments offered online were too expensive, and he heard it was better to see the apartments in person before committing.

Banuelos’s first experience in the Philippines would be representative of his internship as a whole—a great experience, but one that would require sacrifice. However, for Banuelos, it was all worth it in order to gain experience with one of the most prestigious health care institutions in all the world, the World Health Organization (WHO).

The WHO, a United Nations-funded agency that strives to improve the health of all people, is one of the largest and most influential health care organizations. The WHO is credited with helping to eradicate or nearly eradicate diseases like smallpox and polio, as well as its ongoing work researching and assisting doctors and health experts across the world.

Funding an 11-week internship in the Philippines—including housing, food and travel costs—was challenging, but with money he saved from his Terry Foundation scholarship from Texas A&M University as well as money he made while working as a nursing assistant at Baylor Scott & White Medical Center, he was able to cover costs. The internship was also a serious time commitment for Banuelos, as in the evenings he was taking online classes toward completing a health coach certificate from the School of Public Health.

“Several days included long hours, and while it was a worthwhile experience, it was draining at times,” Banuelos said. “Even through it all, I would do it again. Having the opportunity to do the type of work I did is something I never dreamed possible this early in my career.”

The WHO receives internship applications from all over the world, and Baneulos felt fortunate to be selected for such a highly competitive internship. In fact, of the dozen interns selected for the summer term, he was one of only two from North America.

During the internship, Banuelos helped compile health data and information about the Western Pacific Region (including countries such as Australia, Japan, Vietnam and China) into a regional report that analyzes the region’s most dire health issues.

Banuelos found that high gross domestic product countries within the Western Pacific Region like New Zealand and South Korea suffer the most from chronic diseases such as heart disease and diabetes. Poorer countries in the region, however, have more fundamental health issues—like underdeveloped primary health care and infectious disease.

“It was interesting to learn that in Vietnam and Cambodia, there are severe problems with noncommunicable diseases, vaccination rates and maternal and child health,” Banuelos said. “Meanwhile, Japan and China struggle most with an increasingly aging population.”

Although he spent most of his time working on the regional report, Banuelos’s most memorable moments came from his tours of the health facilities in the Philippines, when he discovered how different nursing was in the country from his own experience.

“In the United States nurses tend to work with a patient load of four to five patients, but in the Philippines, there are many hospitals where a single nurse was responsible for 25 patients,” Banuelos said. ”This really put things in perspective for me of how fortunate we are compared to other places in the world and how standards of health care can differ so widely.”

He was also intrigued by how Filipino nurses and doctors managed to deal with much larger patient loads by integrating the patient’s family into the process.

“When there’s a task that a family member could do instead of the nurse, the family takes care of the patient so the nurse can assist others,” Banuelos said. “I was very impressed with how Filipino health care providers and families manage to make it work.”

Banuelos’ interest in health care began in high school as he observed occupational and physical therapists working with students and has since been fascinated with how much teamwork is required in health care.

“It’s amazing to me how a large group of people work together to diagnose and treat illnesses in order to bring forward a positive health outcome,” Banuelos said. “For the doctor, it may just be another day on the job. For the patient, it may be the most impactful moment of their lives.”

After the trip, Banuelos’s biggest takeaway was inspired by watching health care facilities with less money and fewer resources still managing to succeed in adequately caring for their patients.

“We all have similarities that make us want to work toward bettering ourselves and our families,” Banuelos said. “In the Phillipines’ health care system, they have all these problems they had to work through, but with ingenuity, they managed to overcome many of them.”

Banuelos will graduate in 2019 with a master’s degree in public health (MPH) in health promotion and community health sciences and currently plans on continuing his studies to become a pediatrician.

“Prevention is such a big part of public health. Caring for a patient in a hospital is one thing, but caring for people before they get to that point is something that I think is incredibly valuable. That is why I wanted to earn my MPH. I genuinely believe it is preparing me to be a better doctor one day,” Baneulos said. “I am thankful that in my public health classes I have learned how community interventions and health promotion programs can be applied all over the world, but when doing so, it is important to culturally sensitive—an element that I am glad the School of Public Health emphasizes.”