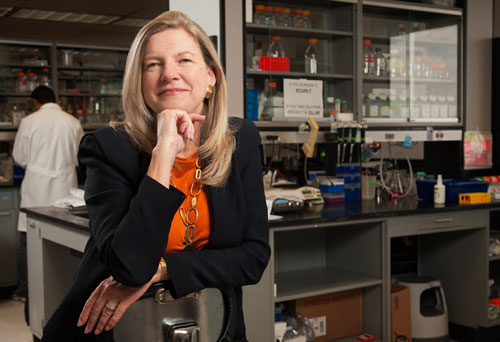 “Without TSC2 to balance peroxisomes, healthy cells could proliferate in an uncontrolled way—just like cancer,” said Dr. Cheryl Walker, director of the Texas A&M IBT.

When it comes to survival on the cellular level, mysteries have abounded for decades. In a paper published in the October issue of Nature Cell Biology, Cheryl Walker, Ph.D., and her team at the Texas A&M Health Science Center (TAMHSC) Institute of Biosciences and Technology (IBT) reveal the answers behind one such mystery—the tuberous sclerosis complex, or TSC2, and its newly discovered role as monitor of peroxisomes that break down fat in human cells.

The peroxisome, a tiny intracellular organelle, was discovered in the mid-1960s, and for nearly 50 years scientists were unsure of how it and TSC2 worked. Now Walker and her team know that TSC2 keeps peroxisomes at the right levels to maintain healthy cells.

“Without TSC2 to balance peroxisomes, healthy cells could proliferate in an uncontrolled way—just like cancer,” said Walker, who serves as director of the Texas A&M IBT and whose lab is part of the Center for Translational Cancer Research in Houston. “Knowing how TSC2 behaves to keep cells balanced could help us learn how to balance or counteract diseases like cancer and heart disease, as well as inflammation and maladies associated with aging. In short, it is a concept that could lead to cures.”

The journal article explains the biology behind the team’s work. Human cells use peroxisomes to break down the fat necessary for survival. When peroxisomes do their job, the conversion of fat creates reactive oxygen species, or ROS. These ROS are similar to the harmful oxidants found in the environment. At low levels ROS play important and normal roles in our cells. Too much ROS, and they damage anything they touch, including proteins, lipids and DNA.

“In a way, the TSC2 is Mother Nature’s DIY antioxidant,” Walker said. “It recognizes when there is too much ROS so that our cells can protect themselves.”

In addition to creating ROS, peroxisomes also boast a tricky talent. Unlike other cellular organelles, peroxisomes can replicate themselves autonomously. Essentially, as the number of peroxisomes increases, so does the level of ROS, and cells must keep it all in check.

To do this, Walker’s team discovered that TSC2 acts as a sensor on every peroxisome to monitor how much ROS is being made. If TSC2 detects too much ROS, it notifies the cell to dispose of the peroxisome. Just as fire triggers a smoke alarm, too much ROS prompts a signal from TSC2, ensuring balance within the cell.

The work took several years to publish in large part because it crossed multiple fields of study.

“It took us a while to reach this point because we had to satisfy three different areas of research: TSC signaling, peroxisome biology and autophagy, the regulated breakdown of cellular components,” said Walker. “Building something that impacts numerous, yet distinct fields is both the challenge and reward of interdisciplinary work and discovery.”

One of the new directions for this work could be new therapies for diseases not previously thought to involve peroxisomes.

“We have known for decades that some of the worst childhood diseases are caused by a lack of healthy peroxisomes,” said Dr. Walker. “The possibility that other diseases, such as cancers, may also be due to defective peroxisomes is totally unexpected, and this information enables the exciting possibility of new cancer therapies targeting the peroxisome.”