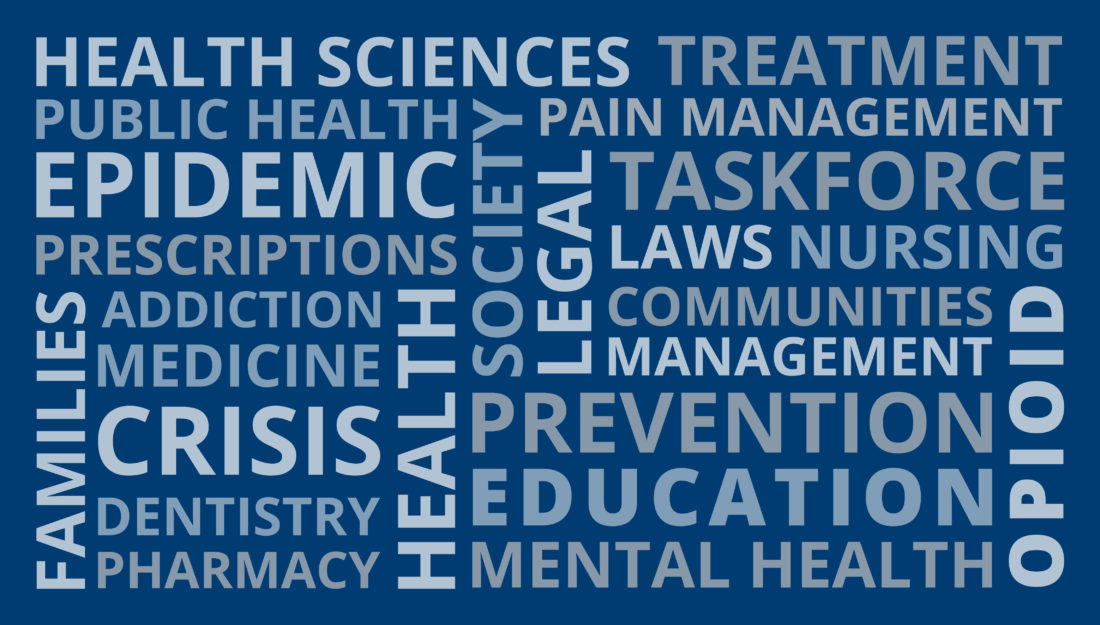 With the federal government declaring a public health emergency, the growing opioid epidemic in America has become more visible with more than 1,000 people treated daily in emergency rooms for misusing prescription opioids. Closer to home, Texas has experienced a significant increase in opioid overdose death in recent years, with fentanyl now on the streets in many Texas communities. Texas A&M University Health Science Center has responded by forming a multidisciplinary opioid task force to reduce the burdens of opioid addiction, misuse and overdose on individuals, families, communities and the health care system.

The Texas A&M Health Science Center Opioid Task Force is made up of representatives from all five Health Science Center components (dentistry, medicine, nursing, public health and pharmacy) as well as the Coastal Bend Health Education Center. It will serve as a focal point for research, education and practice issues critical to addressing the opioid epidemic and its impact on Texas.

“I established the task force in recognition that many of our health science faculty were individually already engaging in research, education and practice activities relevant to addressing the opioid epidemic,” said Carrie L. Byington, MD, dean of the Texas A&M College of Medicine, senior vice president of the Texas A&M University Health Science Center and vice chancellor for health services at The Texas A&M University System. “By working together, we can create an even greater impact in preventing and managing the devastating consequences faced by Texans and others around the country.”

Work has already begun to gauge the implications of the opioid epidemic in current medical practices. In an initial task force survey of Texas primary care physicians conducted by chairperson Marcia G. Ory, PhD, MPH, more than 70 percent reported that they received too little or no training during medical school or residency on patient education of pain management or opioid prescriptions. Additionally, while 73 percent reported that being knowledgeable in safe opioid prescribing is very important in their clinical practice, only 29 percent indicated that they felt very confident in their ability to prescribe opioids safely.

“There is an urgent need for continuing medical education—such as the recent conference in Corpus Christi hosted by task force member Starr Flores. The conference was attended by nearly 150 health care professionals coming from across the state. To share the valuable information with a broader audience, key talks will be available on our online learning management system to be widely distributed in Texas as well as throughout the nation,” said Ory.

To further close the identified gaps in knowledge of opioid pain management safety, the task force is developing continuing education materials for physicians, dentists and pharmacists that will also be widely shared.

Two studies by task force members have been selected for funding in the first year of the ten-year, $100 million President’s Excellence Fund, T3: Texas A&M Triads for Transformation. Ory and colleagues will examine the opioid epidemic’s impact on older adults and Ranjana Mehta, PhD, MS, assistant professor at the Texas A&M School of Public Health, along with colleagues, aims to develop a Smart Sensing System for Opiate-withdrawal Symptoms (Smart Sensing SOS).

“I am delighted that two of our task force members successfully competed in the T3: Texas A&M Triads for Transformation,” Byington said. “I look forward to seeing the results of these two studies and the positive impacts they will have on combatting the opioid epidemic in Texas and beyond.”

Opioid overdose has certainly taken a toll on American society. The Centers for Disease Control and Prevention reported that 116 people died every day in 2016 from opioid-related drug overdoses. These deaths were caused by legally available pain relievers such as oxycodone, hydrocodone, codeine and morphine, as well as the illegal drug, heroin and illicitly produced fentanyl. The economic toll that year added up to $504 billion.

In early February, Ory led a brainstorming session in Corpus Christi with health care professionals on the frontlines of the opioid crisis. The group was made up of representatives from primary care, anesthesiology, Veterans Affairs, oncology, dentistry, pharmacy, public health and addiction recovery. Their charge was to begin a frank and open discussion about how the opioid epidemic is affecting older adults and their families, and to identify intervention strategies for reducing the prevalence and consequences of opioid misuse among older populations. They identified six major contributing factors and potential solutions for addressing them. The group plans to prepare a consensus statement to be presented to key stakeholders in the near future.

“We need to understand patient experiences and how the epidemic is impacting persons with pain, those addicted, their families, the health care system and community at large,” Ory said. “Through collaborative action across the health sciences, this task force will improve clinical practice and, ultimately, the health and well-being of all Texans.”