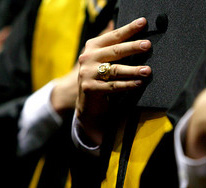 May 11, 2013 — Good Morning and Howdy!   I am sincerely grateful to Admiral and Mrs. Smith and the members of the faculty for the invitation to join you this morning.  My wife Jill and I are honored to be with you today for this celebration of your academic achievements at this University.

As you know, Chancellor Sharp was also scheduled to be here today – he is attending a family member’s graduation today, but sends his best wishes and congratulations to all of you.

In my role as Vice Chancellor, I have attended many college graduations, and I have learned two important lessons about commencement addresses.  The first is to be brief, because today is about you and your family, looking back on challenges overcome and ahead to opportunities for the future.   The second is to speak about something you passionately believe in, whatever it is, because memories of specific words will be fleeting, but perhaps something felt may be more impactful and lasting than any specific words could ever hope to be.

So with this in mind, I would like to offer a few remarks about three topics — the what, the why, and the how. The what — what I believe it means to be an Aggie.  The why — why being a Sea Aggie should be an independent source of pride and lifelong motivation to you and your families.  And the how — how is how you should approach the future using all the lessons you learned here  at Texas A&M Galveston, and how you yourself are now entrusted with building this institution’s future legacy.

First, what I believe it means to be an Aggie.  Like perhaps many of you, I became an Aggie only a few years ago.  And I can attest that the saying is absolutely true, from the outside looking in, you can’t understand it, from the inside looking out, you can’t explain it.

First and foremost, being an Aggie means you stand for the core values of this institution.
And they are: Loyalty, Integrity, Excellence, Leadership, Selfless Service, and Respect.

These are not just hollow words for Aggies – they are a way of life.

They permeate the classroom, the sports field, the Big Event, Iraq and Afghanistan and all corners of the globe, your charitable institutions and service organizations, and to the highest levels of state and U.S. government.  Wherever you go, being an Aggie means you epitomize these core values.

Secondly, being an Aggie graduate means that you have succeeded in an academically prestigious and demanding institution with an international reputation for excellence.  Texas A&M is consistently rated among the best values in education anywhere on the planet, and has nationally leading programs in many fields including engineering, agriculture and life sciences.  As a parent, it is very important to me that Texas A&M is rated 2nd in the nation by the WSJ among ALL universities for graduates whom corporations prefer to hire.

Being an Aggie also means being part of a world class team conducting research of national and international importance. Texas A&M conducts over $700 million in research annually, making it the leading research institution in Texas, third ranked research institution in the United States, right behind MIT and UC Berkeley.  We soon hope to be the #1 research institution in the country.  And in that regard, many of you have heard about the recently awarded national biosecurity center awarded to Texas A&M.  Our mission is to provide 50 million doses of vaccine required to stop pandemics of influenza within 4 months, nearly double the speed of current capabilities.  We will also to develop and manufacture all the vaccines therapies and antidotes needed for the U.S. strategic national stockpile to protect against chemical, biolological, radiological and nuclear threats.

Our baseline $285 million contract, with an initial authorization for an additional $2 billion in R&D, has enormously improved our national standings and competitiveness for future major awards.  Moreover, this one project if expected to bring $41 billion in economic development and nearly 7,000 jobs to the State of Texas.  It is Aggie spirit, ingenuity, leadership and drive to serve that makes big, bold projects like this a reality at Texas A&M.

And most importantly, what is means to be an Aggie is that you are, and forever will be, part of the Aggie Family.  Some people call it the Aggie Nation, or the Aggie Network, but make no doubt, it is the Aggie family.  I see the way that students interact with each other, care for each other, unconditionally support each other in a way that only family members tied by a common bond would ever do.

Whenever two Aggies meet on the street, in an airport, at a convention, in France or in China, there is an immediate and genuine bond, a unique and sincere engagement, a lasting trust based only on the fact that they are both members of the Aggie family.  This bond is more than just observable – it is truly palpable.

And where else but in a family would thousands of your fellow students walk silently to an outdoor plaza at 10:15 at night on the first Tuesday of every month to honor their fallen brothers and sisters.  This tradition of Silver Taps, and even more so the annual tradition of Aggie Muster, reminds us ALL that we are members of the Aggie Family.  And although our time here is short, there will always be members of the Aggie family to say here.

Let’s proceed to the second point – why being a Sea Aggie should be a source of special pride to you and your families.  Irrespective of your College Station mother ship, Texas A&M Galveston is a unique, growing institution that is having a global impact on marine and maritime studies.

Texas A&M Galveston is one of the top 5 satellite campuses in the US, and shares that honor with some pretty famous institutions such as

You didn’t sign up for a degree, as your website says, you signed up for an adventure – an adventure that features the ocean as your main classroom.  There are not many institutions that can say that.  You are leading the world in studies of marine ecology and resource management; of how to build undersea pipelines, and bridges over waterways.  You are home to one of only six maritime academies in the U.S., and I understand 35 of you today are in the license option.  The student body has grown nearly 400% in the last 20 years, and now represents 49 states and the DC.   57% of students will pursue a masters or doctoral program.

The faculty here are internationally recognized not only for their technical achievements but also for their dedication to students.  Many of your faculty have received prestigious and competitive funding from organizations such as the National science Foundation, for example, Prof Bert Sweetman who is developing an entirely new class of floating offshore wind turbines.  An undergraduate is prominently featured as a research contributor. (Blake Wilder)

Texas A&M Galveston is also home to eight Regents Professors, an award begun in 1996, that represents the highest honor bestowed by the Texas A&M Board of Regents in recognition of truly exemplary contributions to this university.

The Galveston 2012 awardee was Professor John Schwartz, who studies estuary bacteria in Texas waters and pathogens among seafood – his work has undoubtedly saved many lives but also has impacted billions of dollars in the coastal economy.  More importantly, I would like you to hear his quote upon being bestowed this recognition:

“An award generated through the recommendations of university leaders and colleagues is always meaningful,” he said. “I’m thrilled to receive this honor, but most of all it’s a testimony to the relationship I have with the students I teach. They are first and foremost in my mind. If it wasn’t for them, I wouldn’t be doing what I do. This award is a reflection of my commitment to them.”

I think that just about says it all.

And now I would like to finish with the how — how you should seize your future using all the lessons learned at Texas A&M Galveston, and how you yourself are now entrusted with building this institution’s future legacy.  That is a truly awesome and critical responsibility.

J. Robert Oppenheimer, theoretical physicist and father of the Manhattan project is quoted “No man should escape our universities without knowing how little he knows.”  The world is coming at us fast.  In my own field of medicine, even ten years ago, I could not have imagined the emerging medical miracles of today

So it is critical to be a life-long learner.  Read the newspaper.  Go to lectures, stay involved in the academic and cultural activities of Texas A&M and this Galveston campus.  Be generous with your input, your support, your advice, and yes your money.  Talk to students, brainstorm new ideas, offer them an internship, give them a job.   And most importantly, use what you have learned here – your knowledge, your critical thinking skills, your core values, your dedication to selfless service – to remain in the game.  Don’t be on the sidelines –EVER.  Texas A&M needs you.  The State of Texas and the nation need you.

So I will leave you today with a quote from Steve Jobs, from his remarks at the Stanford Graduation in 2005, and I hope you will hear these words in the context of being an Aggie:  “Your time is limited, so don’t waste it living someone else’s life. Don’t be trapped by dogma, which is living with the results of other people’s thinking.  Don’t let the noise of others’ opinions drown out your own inner voice. And most important, have the courage to follow your heart and intuition.  They somehow already know what you truly want to become.  Everything else is secondary.”

Thank you very much for this opportunity, and again congratulations to you, and all of your family and friends who stood behind you to make this day possible. 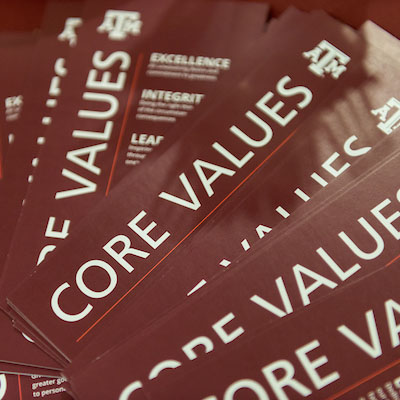