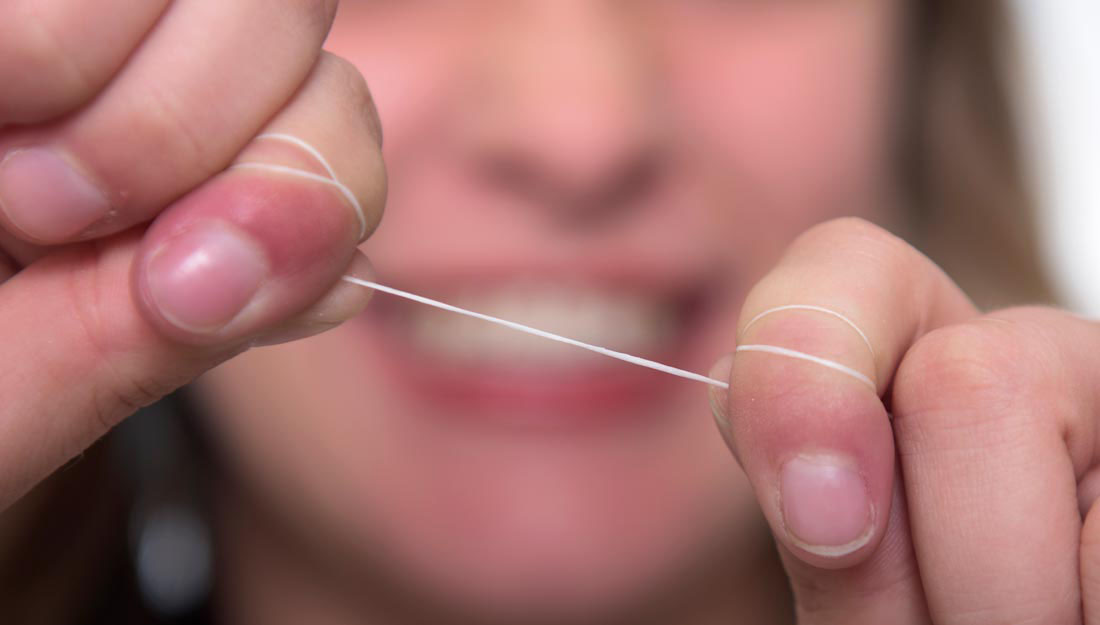 Those who floss, and those who just say they do

The well-trained dental mind can spot a flosser the instant the patient reclines in the chair and opens his or her mouth for an exam. The gums are firm, coral pink and stippled similar to the dimples in an orange peel. They won’t bleed when probed with a dental explorer, and there may be just a slight amount of plaque, with no food debris — unless the patient has just come in from a meal.

“When patients floss routinely, it’s obvious,” says Joe Simmons, D.D.S, assistant professor in general dentistry at Texas A&M University Baylor College of Dentistry. “We are going to see a different oral environment and healthy soft tissue, as opposed to someone who only flosses before an appointment. There’s reddened tissue everywhere. The patient hasn’t done it in a while and doesn’t know how much pressure to put, resulting in telltale lacerations in the gum tissue.”

These types of scenarios are more common than one might think. According to a recent survey from the American Academy of Periodontology, approximately 27 percent of U.S. adults admitted they lied to their dentists about how often they floss their teeth. The survey, which collected responses from more than 2,000 adults in the top 10 U.S. markets, including Dallas-Fort Worth, also revealed that more than one-third of Americans would rather opt to complete an unpleasant activity — washing the dishes, cleaning the toilet, sitting in rush hour traffic — than floss their teeth.

While the premise behind this oral hygiene practice and dentist-patient exchange has humorous undertones, the implications aren’t so lighthearted. According to the academy, one out of every two adults over the age of 30 has advanced periodontal disease, an inflammatory disease that jeopardizes the gums and bones in the jaw, eventually resulting in tooth loss. Even though myriad factors — such as age, genetics, medications and tobacco use — contribute to its progress, poor oral hygiene is considered a primary cause of periodontal disease.

That’s because brushing alone doesn’t remove plaque — composed of more than 500 species of bacteria — that forms below the gum line and in the contact areas between teeth.

“You need to get something in there to mechanically remove the plaque,” says Simmons. “That is the only way that you can get teeth clean in certain spots, where it is too narrow to get even the finest brush bristle in, and there’s no other way to clean that except with floss.”

There’s one cut and dried explanation that Simmons, also in private practice in Lewisville, Texas, hears from patients more than any other when he asks about their flossing regimen, or lack thereof.

Celia Heppner, Psy.D., a pediatric health psychologist at Children’s Health Dallas and assistant professor at UT Southwestern Medical Center, says it’s not so much about the question but more so how it is framed.

“Dentists often ask about how you have been doing with flossing since your last visit. The time range that is used when dentists ask about flossing, and how specific they are, may influence how patients are reporting their flossing behavior,” says Heppner. Her advice: Be specific.

“It’s helpful to start out with a broad, open-ended question and then get very specific, such as, ‘Over the last two weeks, how many times did you floss?’ It’s harder for people to generalize their best week to the last two weeks.”

Simmons has his own version of navigating this dialogue.

“There’s this old adage that when patients tell you they floss religiously, ask them if it’s on Christmas or Easter,” Simmons says. “Sometimes they break down on that and say, ‘You got me on that one.’”

On a serious note, phrase the questions correctly to elicit the kind of response so that you can judge a little bit better, Simmons says.

“I tend to ask more open-ended questions that patients can respond to in relation to the flossing issue. It’s not something that you jump right in and begin a conversation with; I’ll ask after I’ve talked to them a while and begun to establish a rapport with them.”

Once the flossing conversation has been initiated, it helps to offer options. If patients find this practice difficult, for instance, Simmons might suggest waxed floss or even a little-known method: the knotted floss technique. While evening yields more benefits from flossing than at any other time of day, as saliva flow decreases at night, localizing the effect of bacteria on the tooth and gum structures, if patients can only remember first thing in the morning, that’s better than nothing.

“Find the routine that works for you, and use it,” says Simmons.