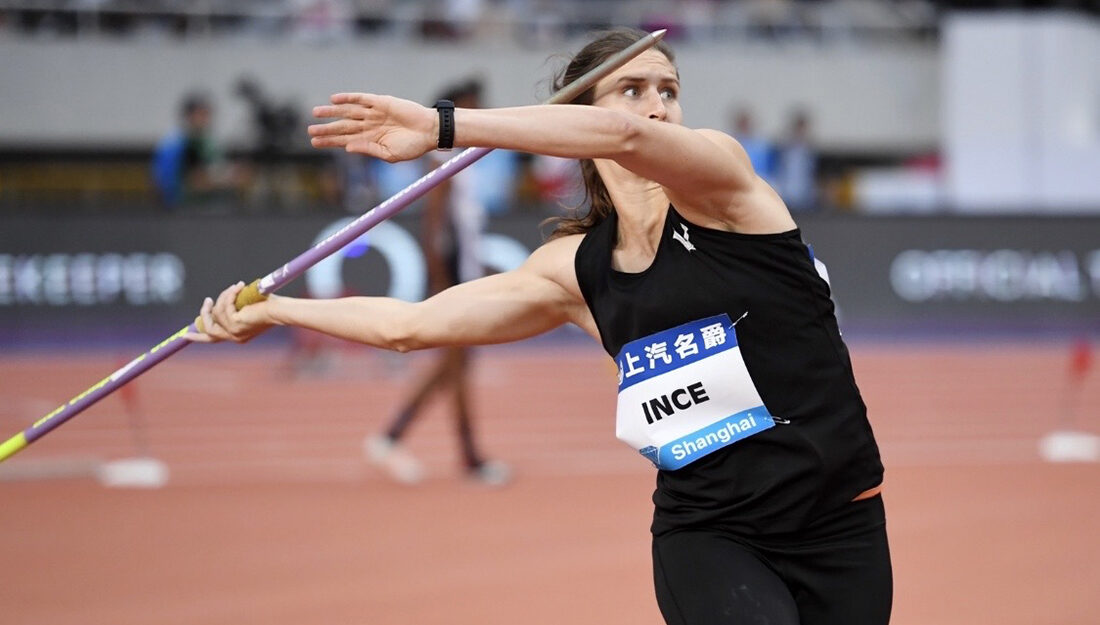 School of Public Health graduate Ariana Ince will compete in the javelin for the United States at the Tokyo Olympic Games
July 23, 2021
Facebook0Tweet0

Ariana Ince is no stranger to making changes. After earning a degree in civil engineering she went in a completely different direction for her graduate degree, turning to public health. Much like her educational journey, Ince made a change in her track and field career, switching from pole vaulting to throwing the javelin during her junior year in college.

Now Ince, who earned a Master of Public Health in Occupational Safety and Health from the Texas A&M University School of Public Health, is headed to Tokyo to represent the United States in the javelin competition. Qualifying in the event is slated for Aug. 3, with the finals scheduled for Aug. 6.

Ince’s path to Tokyo wasn’t an easy one. At the U.S. trials in Oregon, she had a best throw of 188-feet, 7-inches (57.49 meters), placing her just outside of the top three, which is the cutoff for making the Olympic team.

The third-place finisher, however, did not reach the qualifying standard of 209.974 feet (64 meters) and was not ranked in the Top 32 in the world. As a result, Ince, who is currently ranked 17th in the world, received the final spot on the Olympic team.

“I kind of back-doored my way into it,” Ince joked. “I still very much believe that I deserve to go, but I did it in the most stressful way possible. I don’t have a medal from the Olympic trials, I don’t have photos with a medal and the flowers, but I snuck in and now I get to go to the Olympics.”

Ince joins 25 other Olympic athletes with ties to Texas A&M, including Maggie Malone, the top qualifier in the javelin after winning the trials with an Olympic Trials record throw of 208-feet, 4-inches (63.50 meters).

Additionally, Ince’s roommate at the training center in California is Annie Kunz, a Texas A&M graduate who qualified in the decathlon. Kunz, who also played soccer at Texas A&M, was a member of the track team when Ince served as a volunteer assistant.

“I think this Olympics is going to be more fun than if I would have made one of the previous ones because I know so many of the people on the team,” Ince said. “I am just so excited that I get to hang out with them.”

Although Ince is a first-time Olympian, she has represented the United States on the international stage, competing in the World Championships in 2017 and 2019 as well as the Pan American Games in 2019. Ince won the U.S. national title in 2019 and also won the bronze that same year at the Pan American games.

“I’ve been representing the U.S. in other international competitions, but I know this is a completely different stage and it is a bigger deal,” she said. 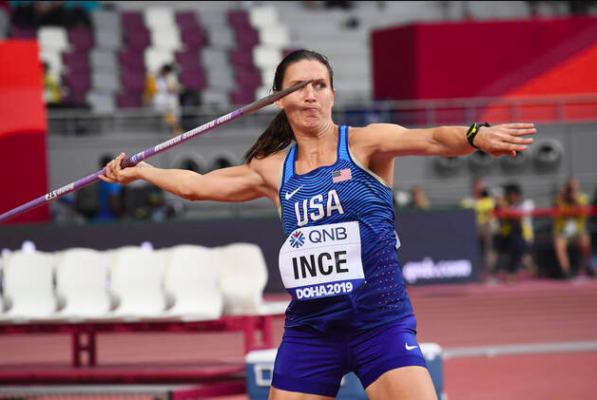 Ariana Ince throws the javelin during the World Championships in Doha, Qatar in October 2019. Photo by Chai V.D. Laage.

Ince, who grew up in Gonzales, Texas, went to Rice University on a track scholarship and won the Conference USA championship in the pole vault, both indoors and outdoors, in 2010 and 2011.

After graduating in 2011 she moved to College Station to train for the 2012 Olympic trials. During that time, she started working for Jerome Congleton, PhD, PE, CPE, doing biomechanics analysis for the Texas A&M swim team.

During a conversation with Congleton, who invented the Neutral Posture Chair and who at the time was a professor in the School of Public Health, Ince figured out what she wanted to pursue for her graduate degree.

“He said that it sounded like I was interested in ergonomics, and he explained to me what that was,” Ince said. “It sounded like the perfect mesh of what I like to do and what I thought was important.”

While working toward her master’s, Ince began to work for Martha Parker, MS, CPE, at her company m-erg, an ergonomic consulting firm. When Parker took her current position as a project manager for the Texas A&M Ergonomics Center, she asked Ince to take over m-erg. Ince did not hesitate.

“M-erg was her baby and she handed it to me and said please take care of it,” said Ince, who is currently president of m-erg. “I guess that meant she trusted me. She was very instrumental in showing me what a good work-life balance was, and she did a great job of showing me what it means to be a working professional and to not lose your life in a job.”