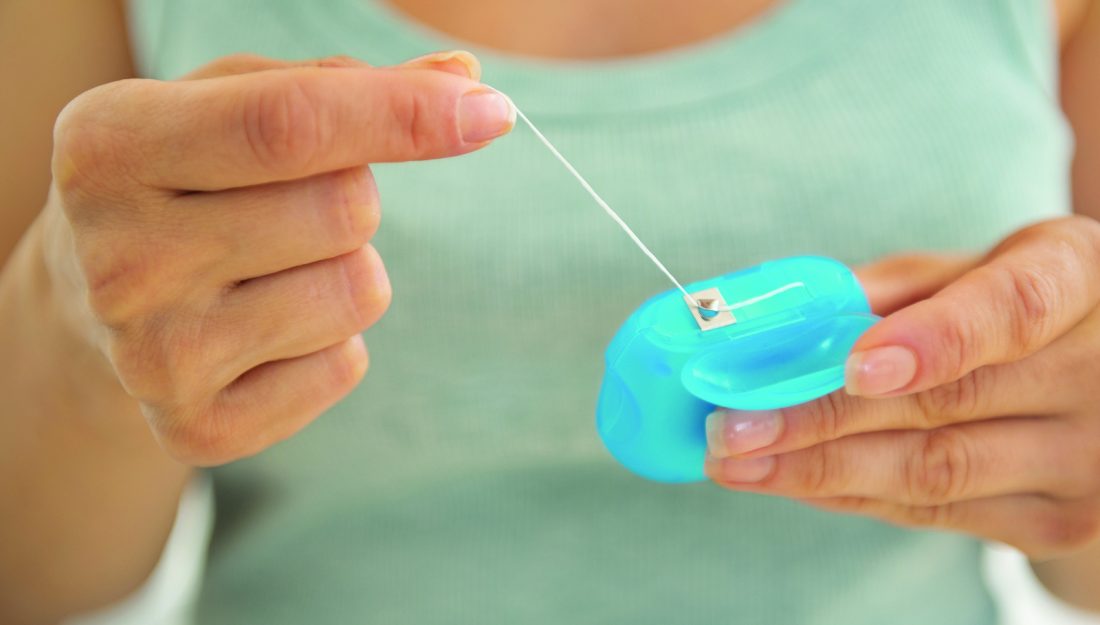 To floss or not to floss – or is it that simple?

There’s something missing from the federal government’s “2015-2020 Dietary Guidelines for Americans.” You have to look closely, otherwise you might not notice that in the customary corner of the “Use Sugars only in Moderation” or “Healthy Eating Patterns” sections, there is no longer any reference to flossing.

This omission launched a scourge of media dialogue in late summer 2016. Among the voices in the chatter: “Hooray! We didn’t want to floss anyway!” “We knew we were always right!” In the midst of it all, a constant, steady voice of reason: Oral health professionals urging patients to continue the age-old practice, leaving multitudes to scratch their heads in bewilderment. To floss, or not to floss?

It’s common sense. Brushing alone doesn’t remove plaque that forms below the gum line and in contact areas between teeth.

“You need to get something in there to mechanically remove the plaque,” says Dr. Joe Simmons ’98, ’99, clinical assistant professor in general dentistry. “That is the only way that you can get teeth clean in certain spots, where it is too narrow to get even the finest brush bristle in, and there’s no other way to clean that except with floss.”

Composed of more than 500 species of bacteria, plaque produces a telltale sign, one of the first things that students in Texas A&M College of Dentistry’s Caruth School of Dental Hygiene are trained to spot during their patient interactions. The easiest way to tell if a patient has not been flossing correctly — or at all — says dental hygienist Ariana Mendoza ’17, is if the gums bleed when inserting an instrument or floss in the interproximal areas.

But perhaps the guidelines’ omission of flossing from advice on what it takes to be a healthy American begs the question: Is it all or nothing? Are there just two options: floss or leave teeth exposed to the ravages of food debris, bacteria and enamel-eroding acid?

Simply open the lid to that kit, and there are many tools from which to choose that are not of the traditional nylon string persuasion: handheld flossers, water flossers, interdental picks and brushes, and, while not as widely used on our continent, there’s miswak, or chewing sticks. For those with wire braces or lingual retainers, special options include floss threaders and prepackaged orthodontic flossers.

“Technically, you don’t need dental floss to keep a healthy mouth, but you do need something to get in there between the teeth,” Wathen says. “It’s the concept of using nothing that leads to potential disaster.”

Dr. Levi Parmly, a New Orleans dentist, was on to something with his 1819 book, “A Practical Guide to the Management of the Teeth.” In it, he urges readers to use the “waxed silken thread, which, though simple, is the most important. It is to be passed through the interstices of the teeth, between their necks and the arches of the gums, to dislodge that irritating matter which no brush can remove, and which is the real source of disease.”

Another early flossing advocate, Dr. Charles Bass, echoed that sentiment. While known as one of the fathers of preventive dentistry, Bass was actually not a dentist at all but a physician and scientist. With more than 30 years of research stretching from the 1940s to 1970s revealing a link between bacterial infections, cavities and gum disease, he felt compelled to advocate removing such bacteria through brushing and flossing, even going so far as to design a toothbrush and unwaxed nylon floss, though he declined to profit from these inventions.

But as the decades passed, the voices of these “flossing fathers” seemed to grow faint in the face of little definitive research on the merits of the regimen. The findings that have gained traction in recent years seem to muddy the waters as far as flossing is concerned.

Take for instance, a 2015 study published in the Journal of Clinical Periodontology, “Efficacy of Inter-Dental Mechanical Plaque Control in Managing Gingivitis — a Meta-Review,” in which nearly 400 papers were screened to evaluate the effectiveness of dental floss, interdental brushes, wood sticks and water flossers. The conclusion: The majority of existing studies fail to demonstrate that flossing is effective in plaque removal. On a positive note, all devices investigated seem to help with mitigating gingivitis, which could point to a mechanical issue when it comes to flossing more than anything else.

Others, like a 2013 article in The Journal of Clinical Dentistry, make the case for specific interdental cleaning devices — just not floss. In “Evaluation of the Plaque Removal Efficacy of a Water Flosser Compared to String Floss in Adults after a Single Use,” 70 adults were assigned to one of two groups: using a water flosser and manual toothbrush, or using waxed string floss and a manual toothbrush. The results: The water flosser group’s whole mouth plaque reduction came in at about 74 percent, while the string flossing group trailed at approximately 57 percent.

One caveat, as Dr. Linda Cheng, clinical assistant professor in general dentistry, points out, “It’s hard to ensure everyone in a research study actually flossed properly or used the proper technique.”

Even the American Dental Association acknowledges the challenges to gathering high-quality data to back the merits of flossing or use of any interdental cleaning device, for that matter, in part for the very reason Cheng describes.

Then, of course, there’s the age-old challenge of motivating patients to change oral health routines, coupled with 2015 findings from the American Academy of Periodontology that patients are not always truthful with their dentists about their flossing habits.

In an Aug. 2, 2016, statement released amid the noise of the “flossing” media frenzy, the ADA sums up the dilemma: “What approach should clinicians take on a topic, such as flossing, when there isn’t strong evidence? The first is to recognize that even in the absence of strong evidence, patients often look to the professional for guidance. In this case, while the average benefit is small, and the quality of the evidence is very low (meaning the true average benefit could be higher or lower), given that periodontal disease is estimated to affect half of all Americans, even a small benefit may be helpful.”

While the evidence supporting flossing may be challenged, research-wise, a few science basics can help explain the rationale behind its use.

“Whether flossing is redundant is somewhat immaterial,” Wathen says. “What’s not redundant is the bacterial population of the mouth, and what happens if it produces problems. The issue is, how do you keep the biofilm under control so that the biomechanical results of that biofilm won’t affect people negatively?”

Lisa Mallonee, professor and graduate program director in the college’s Caruth School of Dental Hygiene, explains what happens when aerobic bacteria are coupled with simple carbs (think sweets like table sugar and sodas).

So how does flossing fit into the mix? It helps disrupt the biofilm lurking between teeth and at the gum line, serving to reduce the level of aerobic bacteria, and with it, enamel-eroding acid.

Then there’s anaerobic bacteria. They’re the major pathogens that cause periodontal disease, and for good reason.

“As plaque ages, it becomes more insulated and less oxygenated. And then the anaerobes reach the point where they can cause disease,” says Dr. Terry Rees ’68 (Perio), director of the Stomatology Center at the dental school.

You can find these in the film atop your tongue, if you neglect to brush it, but most commonly, anaerobes skulk in the tiny triangle shape at the gum line where two teeth meet, usually called the interproximal area. When plaque in this area accumulates unabated, gingivitis — swelling of the gums — results. As inflammation causes the height of the crevice in the gum tissue to increase, the anaerobes settle in, causing even more destruction.

With time, bone loss is inevitable for most, but not all, individuals.

“When you floss, if you do it carefully, and you make a ‘C’ shape around the tooth, you can actually go under the gum 2 to 3 millimeters, and that’s where you can partially disrupt the anaerobes,” Rees explains.

If flossing is something we have taken for granted, as Wathen says, and patients likely aren’t interested in a science lesson during their appointments, what approach can dentists take other than a figurative “take our word for it?”

A reminder of flossing’s ancillary benefits is one possible tactic.

“Patients have already heard time and time again about how flossing can prevent gum disease and cavities, but it might be good to help patients see
flossing as an adjunct way to also help prevent or minimize stains between teeth, bad breath or bleeding gums,” Cheng says. “This is an age where patients are very much into esthetics and fresh breath.”

Perhaps dental professionals can make more of a lasting impact when they take the time to work through flossing with patients, instead of just putting them on the spot as to whether they adhere to the regimen. It’s also an opportunity to share new information, such as encouraging them to maximize flossing’s benefit by practicing the routine before brushing, and especially at night.

Mendoza starts by asking patients to demonstrate their flossing techniques. After getting a good look at form, her next step is to ask them if they are willing to try something new in regard to their oral hygiene. It’s an interactive way to fine-tune ineffective technique.

“Always allow the patient to engage and be excited about learning something new; never try to force anything,” Mendoza cautions.

She’ll then demonstrate flossing while stating each step aloud, giving the patient the chance to show off the new skill afterward.

It’s something Cheng teaches her dental students in clinic, as well. “Whether it is flossing, using a floss pick or a floss holder, we have to spend time showing patients the correct technique in using that adjunct,” Cheng says. “In dentistry, it is important to spend as much time demonstrating to our patients how to floss as we do asking them if they flossed at all.” 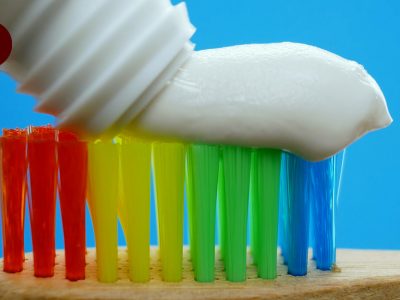 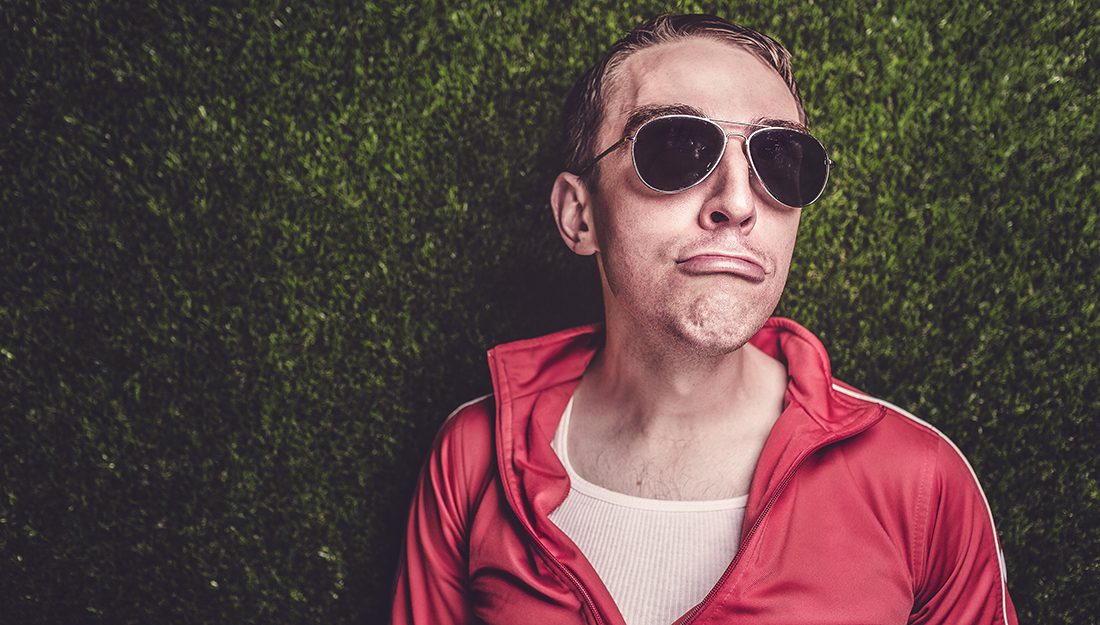