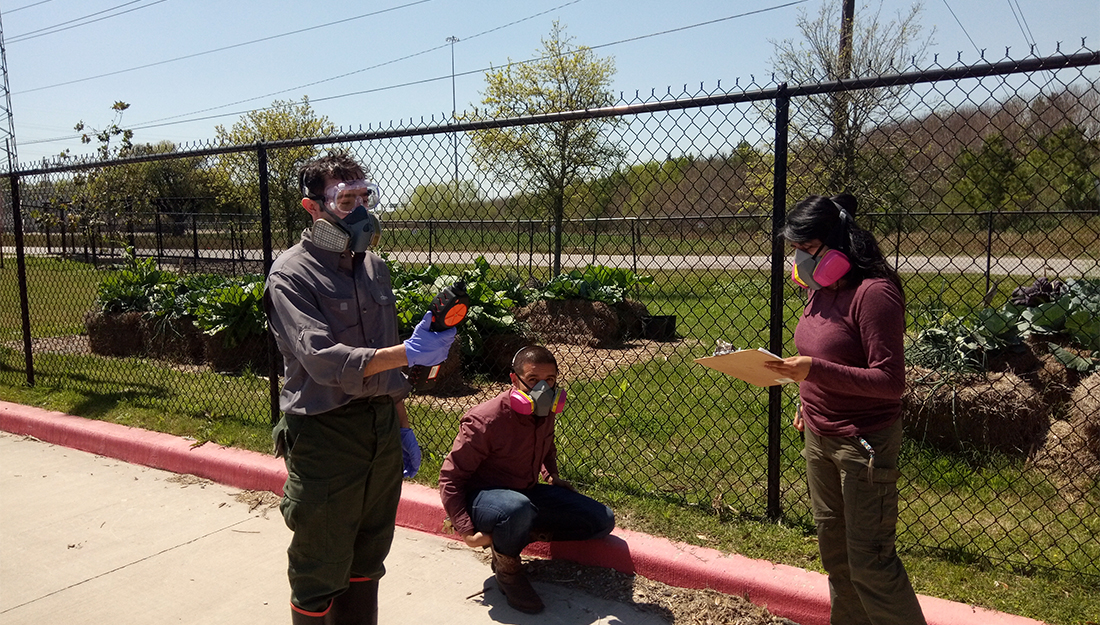 Understanding the implications of Deer Park

On March 17, 2019, a fire broke out at the International Terminals Co. (ITC) petrochemical plant in Deer Park, Texas, sending a large plume of smoke into the air and triggering multiple shelter-in-place warnings for residents in nearby communities. The chemicals released during the ITC incident raise concerns about the short- and long-term health risks for people near the plant and the effectiveness of efforts to communicate risks to the public.

Garett Sansom, DrPH, research assistant professor in the Environmental and Occupational Health Department at the Texas A&M School of Public Health and associate director of the Institute for Sustainable Communities at Texas A&M University, led an effort to collect air, water and soil samples in communities around the ITC plant to help measure the fire’s impact.

Immediately after the ITC fire sent a massive plume of black smoke high into the air, people began having safety concerns. The Texas Commission on Environmental Quality (TCEQ) reported no problems at the beginning of the incident as heat from the fire caused smoke and fumes to rise into the air. However, once that plume started cooling, problems would begin.

Once the fire was sufficiently controlled to allow researchers into surrounding areas, Sansom and his colleagues began collecting samples in coordination with several communities and organizations around the Houston Ship Channel, Texas Environmental Justice Advocacy Services (TEJAS), TCEQ, the Houston Health Department and area schools such as Houston’s Furr High School and Jones Futures Academy.

Researchers from the SRC sampled sediments from Trinity Bay. Soil and water sample analyses are still being conducted, but air samples indicated elevated levels of benzene and TVOCs.

“These kinds of exposures are what you expect in an occupational setting,” Garett Sansom said. In occupational settings, respirators and other personal protective equipment are available, but few residents had access to this sort of gear, and it is unclear what the health implications of a large-scale exposure of this type would be.

“Soil samples were collected from school vegetable gardens and are being screened for selected heavy and trace metals and PAHs,” Kirsch said. “This research will identify potential post-disaster food safety risks and inform the presence, quantity and distribution of chemical contaminants in urban soils.”

Sansom and his colleagues plan to continue the monitoring of soil and water and levels of PAHs and TVOCs inside homes in these communities and have applied for a grant from the National Science Foundation to further this work.

Additionally, better understanding of PFOS concentrations in the water and how the compound spreads will be crucial. PFOS can potentially harm wildlife and pollute aquifers, but Garett Sansom said there is little data on how PFOS exposure affects humans.

Sansom and his colleagues are also investigating how effectively authorities were at communicating risks to the public during the ITC fire. Early in the incident, public safety officials issued shelter-in-place orders for nearby communities. These orders were then lifted and later reinstated as the situation at the ITC plant changed, leading to uncertainty among area residents. To better understand risk communication effectiveness, the researchers will investigate how people responded to the orders, their levels of trust of public safety officials and how they were informed about the situation. The goal is to identify areas for improvement in public safety messaging.

“We need better and smarter risk communication and avenues to improve relationships between industry and surrounding communities,”Garett Sansom said. “A long-term longitudinal study needs to be conducted looking into the effects of the ITC incident and ongoing exposure to PAHs, TVOCs, benzene and other hazardous chemicals in nearby communities.”

The World Health Organization states that nearly 25 percent of premature deaths are due to environmental risk factors. Sansom said this fact calls for policies and programs like the lead abatement programs in the past used to reduce exposure risks decades ago. Better monitoring of soil, air and water and improved understanding of long-term effects of pollution on the environment and human health are vital first steps in tackling this public health issue.

“This was the most major petrochemical fire in a while,” Garett Sansom said. “We’re trying to react as fast as we can.”