How do mosquitoes transmit Zika?

Mosquitoes become infected when they bite a human who has the virus, and are then capable of spreading the virus to other susceptible humans. 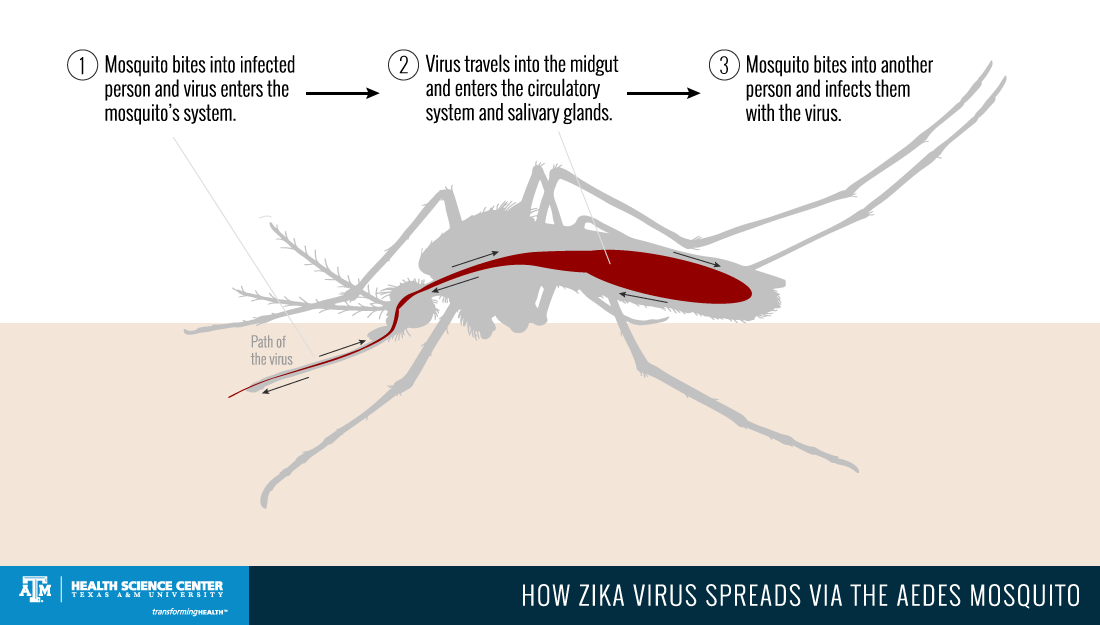 What type of mosquitoes can transmit the virus?

Like a number of other diseases such as dengue and chikungunya, the main way the Zika virus is spread is through the bite of the Aedes aegypti and Aedes albopictus species of mosquitoes. These mosquito vectors are abundant in many urban environments of Texas and are active during the day and night, increasing the period that humans are at risk of exposure.

Can I get Zika from having sex?

Yes, but this form of transmission is far less common than mosquito bites.

Can Zika be transferred through saliva? If so, is kissing dangerous?

Although research shows that the virus is present in saliva, we really don’t know enough at this point to know if Zika virus can be transmitted this way. Still, if you’re pregnant, it probably wouldn’t hurt to avoid exchanging saliva with someone who could be infected with Zika.

Are condoms effective for preventing sexual transmission of Zika virus?

Yes, barrier contraceptive measures that prevent semen from being transmitted are useful for preventing Zika.

How long does the Zika virus live in semen?

We’re not sure, although it seems to lives in semen longer than it does in the person’s blood, so a man can have a negative Zika blood test and still be able to transmit the disease to his partner.

Can a female partner transmit Zika virus to her sex partners?

Although it is probably less likely than transmission through semen, yes, it is possible.

Can the virus be transmitted in blood?

Yes, there is some evidence that the virus can be transmitted through the blood. The Food and Drug Administration (FDA) is recommending that blood banks in the American territories with locally transmitted Zika to import whole blood for transfusions from other areas. The American Red Cross and the FDA are also asking blood donors who have traveled to endemic areas (Mexico, the Caribbean, Central or South America, or Miami, Florida) within the last 28 days to wait to donate. If they have experienced any Zika symptoms, potential donors should wait until a month after the symptoms resolve. On August 26, 2016, the FDA started recommending the entire blood supply be tested for Zika.

Is there any other way the virus can be transmitted?

There has been one case of a man contracting the virus, likely when he was caring for his father, who eventually died of Zika. As of June 15, 2016, there has also been one reported instance of someone being infected with Zika in a laboratory setting in the United States. There may now be an explanation for these cases: Researchers recently presented evidence that the virus can survive on hard, non-porous surfaces for several hours. However, it is important to note that while theoretically possible, this kind of transmission remains extremely rare.