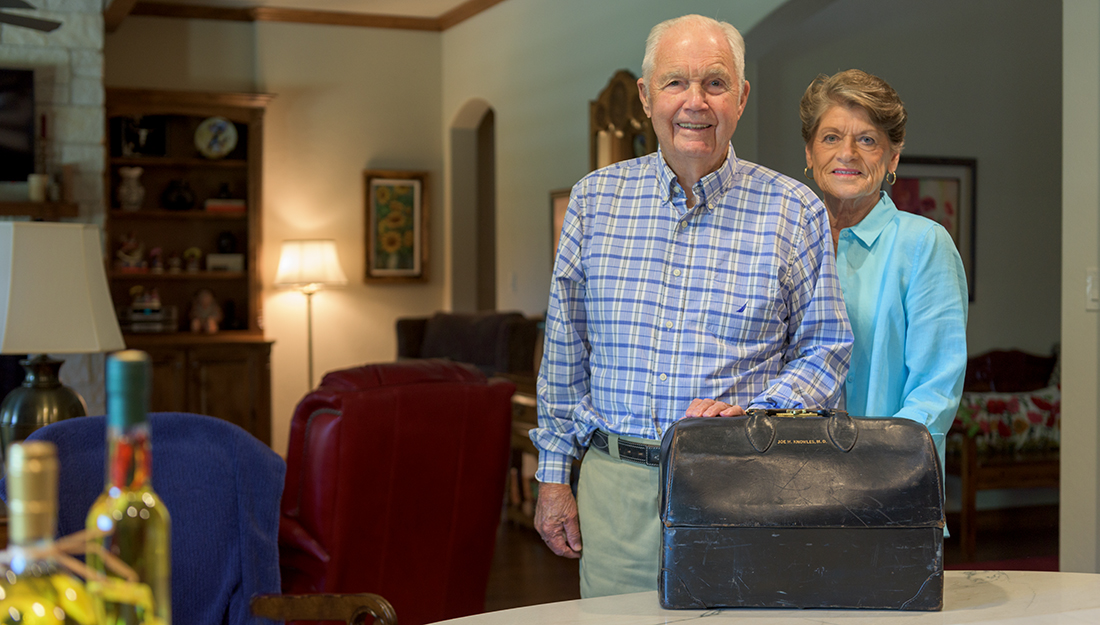 A scholarship 80 years in the making

Sue and Joe Knowles ’50 Scholarship gives back to the place they call home
June 28, 2018

When Joe Knowles, MD, attended Texas A&M in 1946, there were no female students, and a majority of the students were either veterans or in the Corps of Cadets. He paid $25 per semester in tuition. Today, he understands that getting an education is not as affordable as it was 60 years ago, so he and his wife, Sue, want to help aspiring health professionals alleviate crushing debt and make a difference in the areas of health care that need it most.

Health care in rural communities is a priority for Texas A&M, but it is also a focus of the Knowles family. Joe Knowles was a physician in the small town of Borger, Texas, for more than 30 years, serving as an OB-GYN, and was in the first group to receive board certification from the American Academy of Family Practice. The experience led the Knowles to help future health care providers practice in rural areas.

The scholarship committees at each college will consider the students’ rural health preference, in addition to other factors like financial need, activities and GPA.

“We can’t take care of everybody, but the best way we can help everybody is to make a difference in health care education,” said Sue Knowles. “If we can help students pay for medical or nursing school and take on less debt, maybe they can go back to places like Borger, Texas, or Burnet, Texas, and be providers there.”

A heart for rural health, military health and interprofessional education

His earliest years in medical practice had the biggest impact on Joe Knowles’ outlook on health care. During his time in medical school, a senior faculty member told him “pay attention to the labor and delivery nurses, they have had more direct contact with the patient,” and “remember that none of you walk on water, and none of you will ever walk on water”—as a reminder to practice humility. These lessons molded his entire career.

After graduating and completing his clerkship at Bexar County Hospital in San Antonio, Joe Knowles completed his internship at Brooke Army Hospital, where the young doctor performed his first CPR. When the monitors alerted that a patient had gone into cardiac arrest, a ranking nurse, who had served on the front lines of Korea, grabbed him and instructed him to create an incision and perform an open cardiac massage. The young soldier lived, and the nurse gave the young doctor a look that made him feel like a part of the team.

After the internship, Joe Knowles moved to the hospital at the Amarillo Air Force base. The various specialty doctors rotated as “medical officer of the day” in the emergency room, but Joe Knowles was first on call for obstetric or general surgical cases.

In 1956, Joe moved from Amarillo to the nearby town of Borger and began his life and career in the small community in the panhandle of Texas. Borger has always been a big fish in a little pond, as it’s the largest city in Hutchinson County, but its population peaked in the 1960s at about 21,000 people. Since then, it’s averaged at about 15,000 people.

Working in small-town hospitals helped shape Joe Knowles’s views of the importance of teamwork. The North Plains Hospital held 110 beds and 15 bassinettes and was staffed with 16 doctors, who included general practitioners, a radiologist, a pathologist and an ophthalmologist.

“When there’s an emergency in the middle of the night, you can’t look behind you for help,” Joe Knowles said. “You cannot do it alone, and you need your team to come up with a solution. When you solve the emergency, you form a bond with the nursing staffs and you are all part of one team.”

There were three certified nurse anesthetists on staff, but a few years later, the first anesthesiologist joined the team. There were no surgeons or OB/GYN practitioners, and those tasks were done by the general practitioners—with only a few major procedures being referred to Amarillo, Houston or Oklahoma City. He estimates he delivered about 7,750 babies during his practice.

Working together is one of the key reasons why Joe and Sue Knowles hold the Texas A&M College of Medicine and College of Nursing in high regard. The College of Medicine and College of Nursing have helped drive the interprofessional education mission of the Texas A&M Health Science Center. Simulations at the Clinical Learning Resource Center and at Disaster Day give these students real life scenarios to work as a team and utilize interprofessional skills in a simulated environment before they reach the clinic.

In addition to receiving his undergraduate degree from Texas A&M, Joe Knowles grew up in Bryan, Texas, so Texas A&M holds a special place in his heart. He worked with cattle and milked cows twice a day for extra money on a leased pasture near what is present-day Texas Avenue and Villa Maria Road, and those visiting the area now would have a hard time imagining it as a small rural town filled with pastures and cattle.

Joe Knowles has childhood memories of growing up during the Great Depression and moving to College Station. His mother, a teacher in the 1950s at Texas A&M Consolidated High School, had an assistant by the name of John David Crow—Texas A&M’s first Heisman Trophy winner.

“College Station and Texas A&M did a lot for me,” Joe Knowles said. “This has always been my home and my school, and I’m grateful to be able to give back to Texas A&M and the College of Medicine and Nursing because I believe they are focused on what’s important—and that’s teamwork, and rural and military health.”

Today, Joe and Sue Knowles live in Bryan. Both are in their 80s, but Joe still rides his bicycle and the couple drive together to their favorite restaurants around town. Always ready with a joke, smile and life lesson, Joe Knowles gets misty-eyed whenever talking about his love for Texas A&M.

“My wife and I love Texas A&M and what it represents. Texas A&M runs things differently than other universities, and they lead by example,” Joe Knowles said. “We are proud to be able to give what we can to these schools and help wherever we can.”