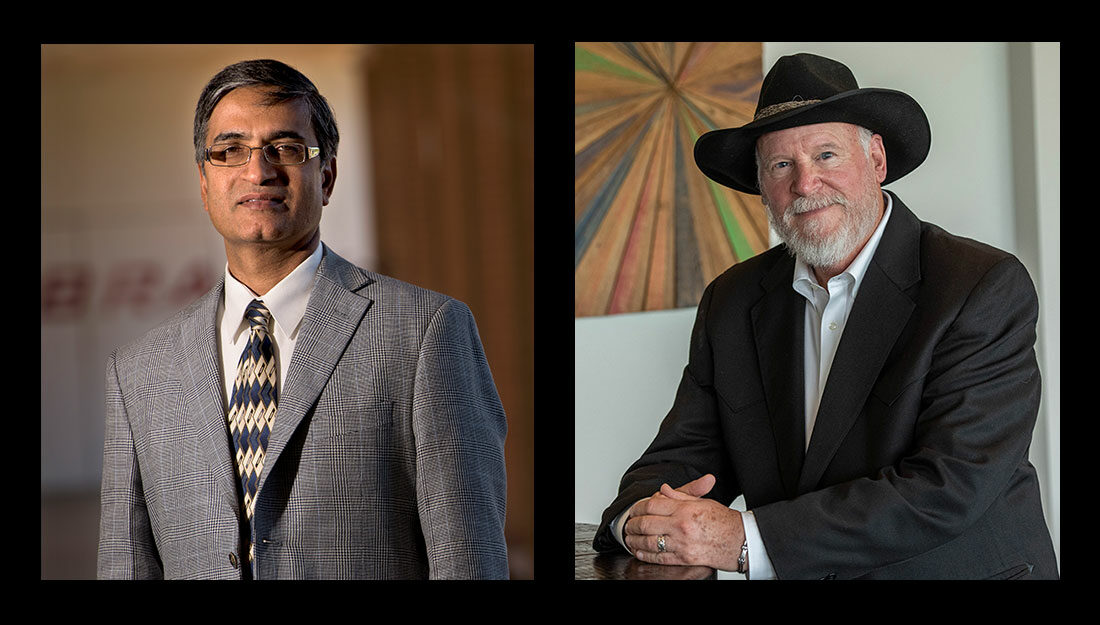 Award honors exemplary Texas A&M faculty members for their contributions to the university and the people of Texas
December 13, 2021
Facebook0Tweet0

Burdine and Khan are two of 12 Texas A&M faculty members honored with this distinction this year. Established in 1996, the Regents Professor Award is bestowed annually by the Board of Regents in recognition of awardees’ exemplary contributions to their university or agency and to the people of Texas. The award is specifically for faculty within the 11 A&M System institutions, the Health Science Center (Texas A&M Health), and the Agricultural and Engineering Programs.

Burdine, who joined the faculty at the School of Public Health in 2001 when it was the School of Rural Public Health, served as interim dean of the school from February 2013 through January 2015. Prior to that he was associate dean for public health practice (2012-2014), assistant dean for public health practice (2009-2012) and head of the Department of Social and Behavioral Health (2002-2005).

Burdine is an internationally recognized expert in population health status assessment and community health development, and is the founding director of the Center for Community Health Development. His areas of expertise include working with rural communities across the United States and with promotoras in colonia communities along the U.S.-Mexico border.

His experience also includes the development of highly sophisticated, cost-effective community health assessment techniques as well as a number of national model programs for community-based health improvement including the National Community Health Worker Training Center and the Tele-health Counseling Center at Texas A&M.

Throughout the course of his career, Burdine has co-authored more than 250 scholarly papers and presentations along with being awarded more than $28 million in grants and contracts for community health improvement related research, demonstration and evaluation projects.

Before joining the faculty at Texas A&M, Burdine spent 10 years as the president and senior scientist at Felix, Burdine and Associates, a nationally recognized health care consulting firm. He also spent 10 years in health system management at Seaton Medical Center and Scott & White in Texas and HealthEast/Leigh Valley Health Network in Pennsylvania.

“Dr. Khan is not only an outstanding researcher and scientist, but also a great thought leader,” said Indra Reddy, PhD, dean of the College of Pharmacy. “His research acumen, hard work and perseverance are noteworthy. Research under his tenure has grown tremendously and has helped the college move up in rankings significantly.”

Khan, who joined the faculty at the College of Pharmacy in 2015, initiated the development of the Texas A&M graduate program in pharmaceutical sciences in 2016 and helped galvanize the establishment of a product development laboratory and a Good Manufacturing Practices (GMP) facility in College Station. The first cohort of students was welcomed in spring 2020.

Khan serves as the director of the Formulations and Drug Delivery Core Lab and is a Texas A&M Presidential Impact Fellow. He is an internationally recognized researcher and leader in the areas of pharmaceutical formulations, complex product design, 3D printed medications, nanoparticulate drug delivery systems, continuous manufacturing and precision medicine. His expertise in multidisciplinary novel technologies has helped harness strengths from multiple entities to accelerate innovation.

Prior to joining Texas A&M, Khan served as director of product quality research within the Center for Drug Evaluation and Research at the Food and Drug Administration (FDA). While at the FDA he was awarded the Department of Health Senior Biomedical Research Service (SBRS) Scientist status, the highest ranking available for a scientific leader in the United States federal government.

Khan is a Fellow of the American Association of Pharmaceutical Scientists (AAPS) and recipient of the 2012 AAPS Research Achievement Award in Formulations Design and Development. He was elected chair of AAPS Pharmaceutics and Drug Delivery Section (2009) and served as founding chair of the AAPS Formulations Design and Development Section (2010). Throughout the course of his career, he has authored more than 275 research publications, 25 book chapters and five books.