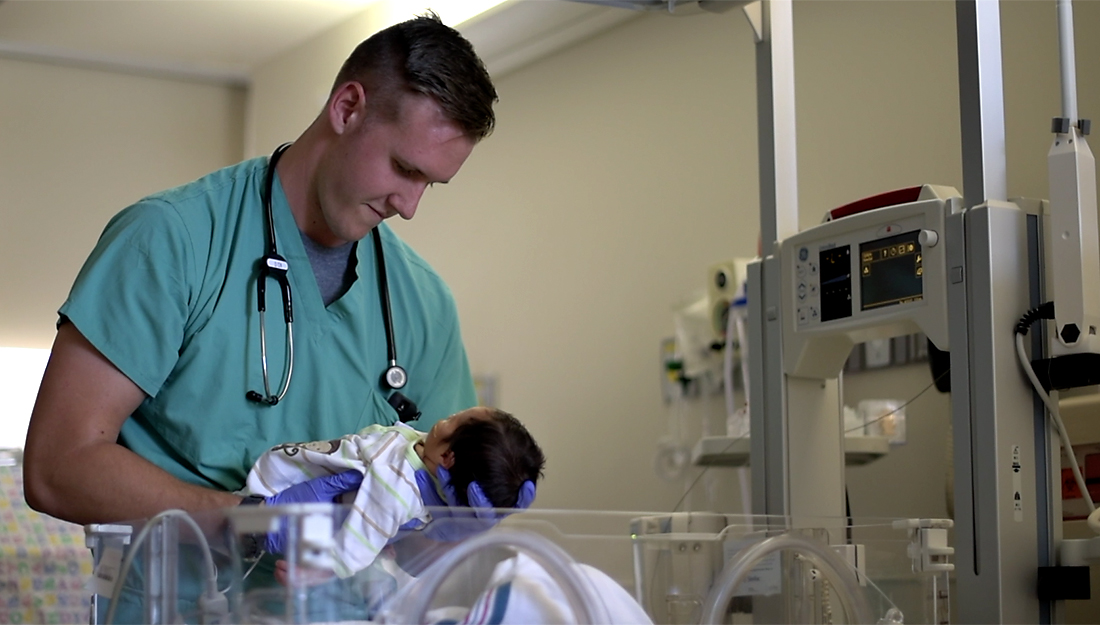 Making “What If” Possible: Mark Ahlenius

Aggie Doc dedicates his life to healing children and their communities through medicine
August 22, 2017
Facebook0Tweet0

Mark Ahlenius, MD, gently picks up a premature baby in the neonatal intensive care unit (NICU). The baby seemed particularly small, even for a preemie, as Ahlenius held him. Ahlenius is a pretty tall guy, but he seemed almost larger than life as he gently rocked and comforted the baby, preparing him for a quick exam. For Ahlenius, this is exactly where he wants to be: helping to heal children—and their families—through medicine.

The Texas native grew up in the Rio Grande Valley, an area infamous for high poverty rates, low income levels, and a severe lack of health care. He knows all too well the havoc preventable diseases inflict on families, and he remembers seeing how a physician could step in, play a role in the community and have a very tangible impact on patients and their families.

While an undergraduate at Texas A&M, Ahlenius began volunteering at a child advocacy center in Bryan, Texas. He started by simply volunteering his time, but his role soon expanded as he helped with forensic interviews for physically and sexually abused children. He continued to volunteer as he went through medical school, and at the same time, his wife volunteered as a Court-Appointed Special Advocate, serving as a “voice in court” for abused and neglected children.

“We both started to learn through these organizations what’s really going on out there,” Ahlenius said. “We learned the breadth of child abuse that was occurring, and we also learned about the foster care world and the other systems in place for children.”

So, in his second year of medical school at Texas A&M, Ahlenius and his wife took in their first child from a local shelter.

“She was 12 years old and we kept her for a full year,” Ahlenius said. “We quickly learned that while it was really hard, we really loved it.”

During his time in medical school, the couple has fostered more than 16 children.

“We’ve had kids from all over Texas,” Ahlenius said. “These kids need somewhere to stay, and they often get split up, away from their siblings and their hometowns. So not only have they been traumatized at their home, they’re now traumatized by this removal. For us it’s really simple: these kids need a home, they have a right to be safe and to be loved and have a right to a home. We’re just providing that simple right to these kids.”

Ahlenius and his wife are currently working on adopting four children as their own, and he said he believes that if there were more people open to fostering, then maybe it could help families repair themselves and stay together.

“If there were more foster homes, then maybe these kids could stay with their siblings, or see their parents at visits, and have a chance to encourage their parents to get back on track, get their lives back,” Ahlenius said. “Yes, it does hurt and tears you apart when you have to say goodbye, but these kids have a right that supersedes that.”

Ahlenius’ dedication to restoring families and advocating for children doesn’t stop at home or in shelters; he brings it to his role in medicine as well.

“We all want family; family is a basic core value of everyone,” Ahlenius said, “and so therein lies a truth that I think we all need to focus on a physician, that we’re all there for the family. We’re not just treating one person, you’re not just treating a kid, you’re taking care of a family. You’re not treating a broken bone, a slapped cheek or a cut on the face—you have to look at it like ‘How can I treat him, take care of him, keep him safe’ and then look to the family and say ‘things are not where they should be, but you can do it, you can get back to where you need to be.’”

Fostering 16 children while in medical school was no easy task, and Ahlenius explained that Texas A&M wasn’t just understanding of his mission, they supported it.

“Texas A&M knew what my wife and I were doing, they knew what we cared about and they said ‘we’re proud of what you are doing, this is shaping who you are, how can we help you?’” Ahlenius said. “I so amazed by the willingness of fellow classmates to help out, they helped us buy additional beds as we took in more kids. And faculty and staff brought us meals as we took in kids—just to help out.”

In addition to recently graduating with his MD, Ahlenius is also fulfilling a goal he’s had since he was in high school as he joins the United States Army. After taking the title of Captain upon graduation from medical school, he is on his way to complete a residency in pediatrics at Fort Sam Houston in San Antonio, Texas.

“A lot of people look at me and ask ‘How can a pediatrician go take care of a bunch of soldiers?’” Ahlenius said. “And I just say ‘well, if you think about it, most soldiers on the front lines are actually 18. So in a way, we’re taking care of kids,’ I’ll be taking care of guys that just signed up after high school that are 18, that are just starting families for the first time in some cases. I’m excited to serve those who are serving us.”

Beyond becoming a unit physician on deployments and taking care of those on the front lines, Ahlenius’ real passion will be realized when he returns from deployments and serves as a military doctor for the young families here in the states.

Throughout his third year, the year that many medical students decide on their specialty, Ahlenius explored various specialties but said he was always pulled back to pediatrics.

“I got the chance to work with a really cool rural pediatrician and professor, Dr. Donald Draehn,” Ahlenius said. “He’s been in practice in this small town for about 40 years. It is amazing to see how he’s raised generations, and he’s not just part of the health care system, he’s part of the community. So that’s what drew me in, that relationship he had with the patients.”

For Ahlenius, he sees the bigger impact in all things, and all types of communities. Whether its mission trips, fostering children, serving in the military or seeing patients, his focus is on finding the problems in a community and figuring out a solution to make a meaningful change.

“One of A&M’s core values is selfless service,” Ahlenius said. “So that’s something I really took to heart and tried to live out. Service, self-sacrifice, it’s that our lives are meant to be for something greater, our lives are meant to be for somebody else. Which is the idea that we’re trained to help somebody. That all this knowledge, and all the gifts I’ve been given, where I’ve been given a chance to have an education. It’s all a chance now to help somebody else get there too. I can make a difference and I can serve.” 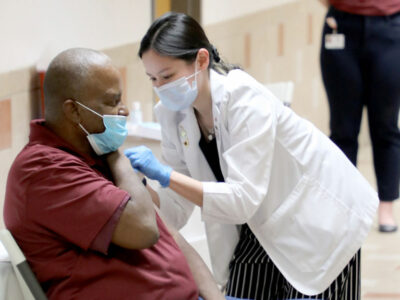