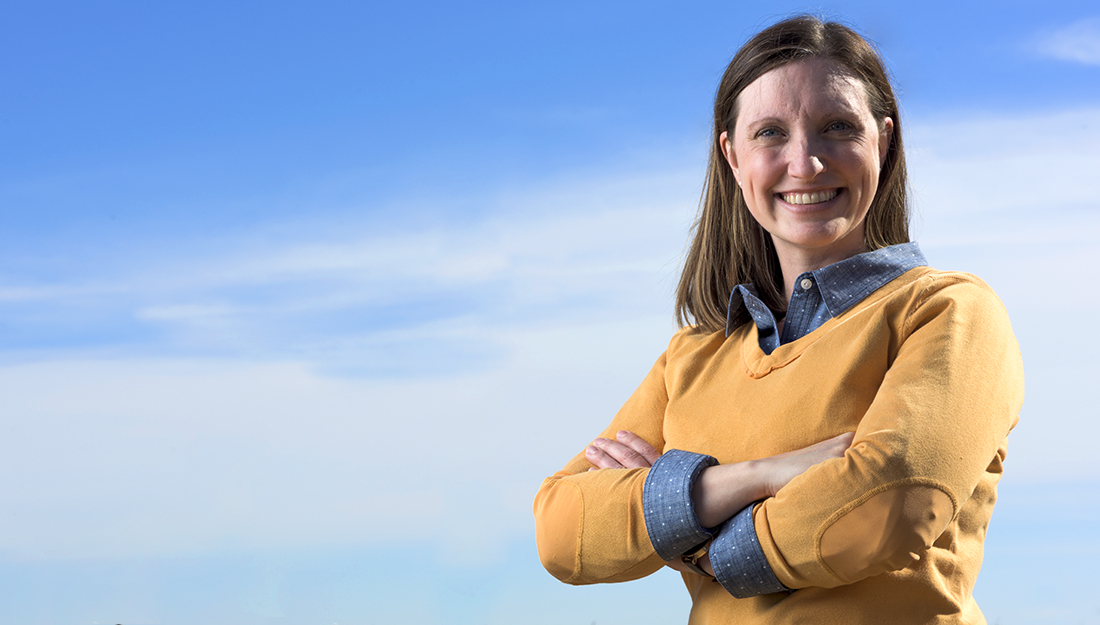 School of Public Health professor shares her journey from a small-town upbringing to building a research program at Texas A&M
November 21, 2019

Natalie Johnson, PhD, is an associate professor in the School of Public Health and the co-director of the Program on Asthma and Research Education at Texas A&M. Although Johnson was not always certain she would become a research scientist, once she began exploring her academic interests at Texas A&M as an undergraduate, her path became clear. Her current research interests include air pollution exposure, particularly maternal and child exposure. She is the 2020 recipient of the New Career Scientist award by the Reproductive and Developmental Toxicology specialty section of the Society of Toxicology.

Johnson began engaging with science by participating in science fairs in her hometown of Navasota, Texas, which lies about 20 miles southeast of College Station, where Texas A&M is located. By the time she was a high school senior, she had already conducted her first clinical trial. For her high school science fair project, Johnson chose to investigate the effects of omega-3 fatty acids on cholesterol, which is known to improve the risk factors for heart disease. Her study consisted of four willing participants: her mom, aunt, grandmother and teacher. She administered her participants concentrations of omega-3 fatty acids through fish oil tablets and daily salmon dinners. With the help of a local clinic, she completed her study by comparing the cholesterol levels in her participants before and after her treatment.

Although performing a clinical trial at the age of 18 may seem to be the work of an aspiring research scientist, Johnson had different career aspirations at the time. “I wanted to be a chef,” she said as she described how much she enjoyed cooking the salmon for her family. Johnson set out to obtain a business degree when she arrived as a first-year student to Texas A&M. “I wanted to own my own restaurant, so my plan was to get a business degree then go to culinary school,” she said.

Instead, Johnson was quickly drawn back into the world of science while taking her science elective course—zoology—taught by Leslie Winemiller, PhD. “Johnson had an illuminating moment during the course and decided to become a biology major on the pre-med track,” Winemiller said about her student. Johnson enjoyed this class so much that she continued to work with Winemiller throughout the rest of her undergraduate studies as a supplemental instructor for the course.

During one of her core biology courses, biochemistry, Johnson discovered her interest in understanding the mechanisms that drive biochemical reactions. This epiphany caused her to leave the pre-med track to focus on research. “I didn’t want to just prescribe drugs to people,” Johnson said. “I wanted to know how they interacted within the body to cause that physiological effect.” After completing her bachelor’s degree in biology, she decided to go to graduate school to develop her interest.

Biting into the science

After graduating from college, Johnson began working as a student worker in the lab of Timothy Phillips, PhD, in the College of Veterinary Medicine & Biomedical Sciences. The research in this lab investigated ways to reduce aflatoxin exposure in rural communities. Aflatoxin is a natural toxin produced by a mold. This mold tends to grow on corn and peanuts. The levels of aflatoxin are highly regulated in the United States, but populations in global rural settings tend to chronically consume this toxin without realizing it.

Although Johnson had not intended to stay at Texas A&M for graduate school, she became so inspired by the research being conducted in Phillips’ lab that she decided to continue working on it for her dissertation. “It was such a great opportunity moving from the College of Science into the College of Veterinary Medicine & Biomedical Sciences, so I ended up staying and getting my PhD in toxicology,” Johnson said.

The research team tested an aflatoxin prevention method discovered by Phillips in a clinical trial in Ghana, where populations have high exposure to the toxin. Phillips had designed a clay that could be used to absorb aflatoxin in an individual’s gastrointestinal tract to prevent it from reaching the liver, where it produces the most toxic effects. Johnson measured levels of aflatoxin exposure in individuals after a three-month period of using the clay and found exposure levels did decrease in individuals who were administered the clay as a prevention method.

During this trip, the research team also studied the effects of pollution exposure from the smoke of burning natural substances. Exposure to this type of pollution is one of the most harmful forms of environmental exposure for maternal and infant health. “So many populations burn wood or anything that is combustible for cooking and heating their homes,” Johnson said. “This observation is what initially got me interested in air pollution research.”

After completing her PhD, Johnson did postdoctoral work at the Johns Hopkins Bloomberg School of Public Health. She continued to research ways to minimize aflatoxin exposure, but with a slightly different angle. Alongside her mentors, she not only researched methods to reduce exposure of the liver to aflatoxin but also explored ways to enhance the natural ability of an individual to excrete toxins.

The researchers worked with broccoli sprouts and other synthetic chemicals that are known to be effective for cancer prevention by activating antioxidant pathways. Using an animal model, Johnson investigated if activation of a specific antioxidant pathway, known as the Keap1-Nrf2 pathway, could be used to enhance the liver’s ability to detoxify and ultimately decrease toxin exposure. She exposed all of the models to high levels of aflatoxin to induce cancer, and those given the treatment that targeted the same pathway as the broccoli sprouts showed no signs of tumors. This indicated that this pathway could be targeted for cancer prevention.

Back to her roots

Johnson returned to Texas A&M as a faculty member in the School of Public Health in 2013. She was particularly excited about starting a research program on maternal and child health and air pollution. As an Aggie and a Texan, Johnson’s first research priority was to address the needs of Texans. She started by investigating the cause of the unusually high prevalence and hospitalization rates for asthma near the Texas-Mexico border in Hidalgo County. She worked on-site at the Texas A&M campus in McAllen, Texas and began researching personal exposure to air pollution in pregnant women living in this area.  She was inspired by the findings that expecting moms were exposed to higher levels of pollutions that, in many cases, were higher than predicted by the nearest outdoor air monitor.

Johnson decided to start exploring the effect of pollution exposure on lung development in her laboratory in College Station. She and her first PhD student, Kristal Rychlik, PhD, created a model to understand the mechanisms of pollution-induced respiratory disease. They found that animal models exposed to urban air pollution during prenatal development could not mount the same immune response as a non-exposed individual when challenged with an allergen. This showed the researchers that early-life exposure could lead to decreased immune function later in life.

Johnson recently received a five-year research grant from the National Institute of Environmental Health Sciences (NIEHS) to continue her research on early life pollution exposure and respiratory infections. At the time Johnson began this research project, she was eight months pregnant with her first child. She remembers sitting outside on a bench at an intersection and noticing secondhand smoke from cigarettes and smelling the fumes of diesel from buses idling waiting to pick up passengers. She recalls thinking to herself, “I think I’ll just wait inside.”

In addition to Texas-focused research, Johnson also makes community outreach a priority. “I am always looking for opportunities to share my story with those who come from a small town to show them that there are definitely ways to get involved in science,” she said. Johnson has hosted high school students in her lab for the past two summers.

This year she is also planning to serve as a judge for the junior high science fair she participated in as a budding chef turned scientist. She now critiques the small sample size and lack of placebo in her high school clinical trial; however, she recognizes the importance of the opportunities she had to engage with science at a young age. She hopes to share her enthusiasm for research with the current students.

Although Johnson no longer envisions herself owning a restaurant, she continues to enjoy culinary pursuits. “I still love cooking, and for me that goes hand-in-hand with science,” she said. Currently, this is manifesting itself as a cheese-tasting venture. “I’ve figured out a scientific way to go about being a foodie,” she said, as she detailed her systematic approach to cheese tasting. So far, she has come across only one cheese she does not like, the French Camembert. Ironically, she said the broccoli flavor was too strong.

Johnson plans to maintain focus on Texas-based research efforts and community outreach efforts throughout her career. She hopes to help others and give back to the community that shaped her as a research scientist. Her first student, Rychlik, weighs in, “I’m proud to be part of the legacy Natalie is building at Texas A&M.”