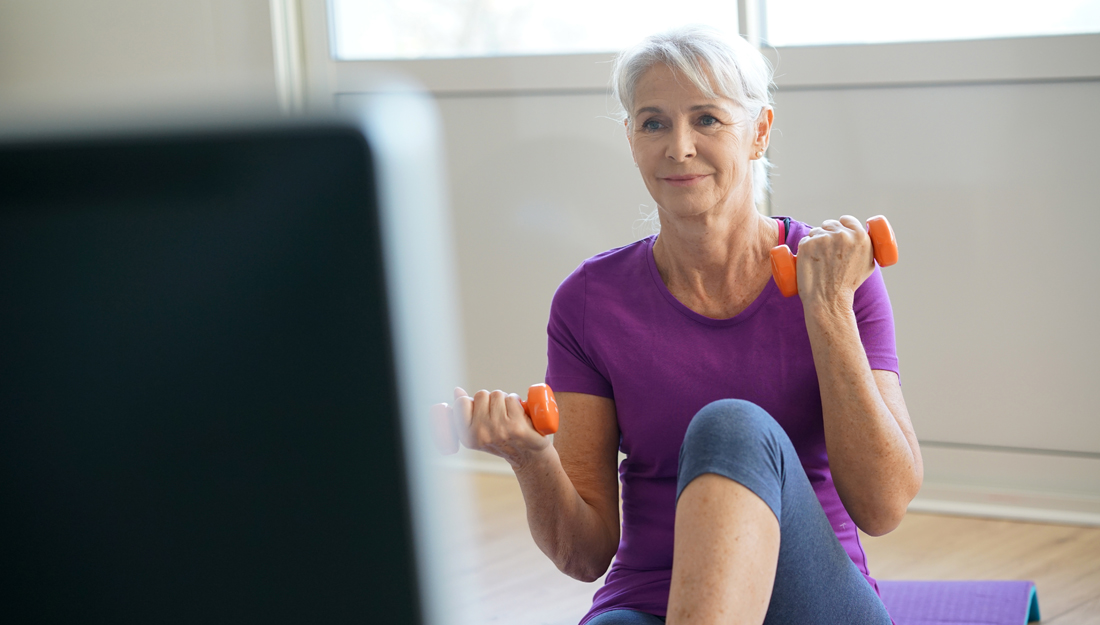 On-screen avatar shows how to perform each movement, tracks the participant’s movements and provides feedback
October 12, 2018

Falls are a serious medical issue for adults over the age of 65 because of their effect on quality of life and health care resources. With one out of four older adults experiencing a fall each year, fall prevention efforts, such as the Otago Exercise Program, or OEP, are crucial. A large volume of research over the past two decades has shown that the OEP significantly reduces fall risk; however, implementing programs like the OEP requires trained providers, which can be difficult and costly to obtain.

In a new study published in the Journal of Geriatric Physical Therapy, Matthew Lee Smith, PhD, co-director of the Texas A&M Center for Population Health and Aging and associate professor in the Environmental and Occupational Health Department at the Texas A&M School of Public Health, joined fellow researchers in testing the viability of a virtual translation of the OEP known as Stand Tall. This translation could lower barriers to using the OEP and make fall risk reduction programs more accessible for many older adults, especially those who are homebound.

The OEP is an eight-week exercise program aimed at improving balance, mobility and lower extremity strength. It involves 17 different exercises that can be carried out with varying levels of intensity, becoming more difficult through increased repetitions, added weight or changing double-limb movements to single-limb movements. The OEP has repeatedly been proven successful at reducing fall risk in participants who complete the course, but it can have low adherence rates, which can limit its overall success.

“Recruiting and retaining participants in fall prevention programs is often difficult, especially among frail and homebound older adults, those who reside in rural areas and those who experience challenges with their mobility and transportation,” said Smith.

Stand Tall uses a Kinect motion-tracking camera like other popular so-called exergames; however, most existing virtual exercise systems target overall fitness rather than specific impairments such as the deficiencies the OEP addresses. The system uses an on-screen avatar to show how to perform each movement and then tracks the participant’s movements and provides feedback. The system also records data such as number of days exercised, number of repetitions completed for each exercise, number of corrections participants needed and reports of pain.

To test the system, Smith and colleagues recruited 42 participants for nine-week sessions held over an 18-month period in 2015 and 2016. The participants selected had to be over 60 years old, able to walk, have at least one risk factor for falling and have at least one chronic health condition, such as diabetes or high blood pressure. The first week focused on training participants to use the system and collecting baseline measurements. After that, participants exercised using the Stand Tall system for 30 minutes per day, three days a week for eight weeks. At the end of the program, the research team measured strength, balance and mobility again to be compared to baseline data.

The researchers cite the coaching and immediate feedback from the system and a sense of accountability due to personnel being able to check progress through the system as possibly contributing to this difference. Smith and colleagues also found that the proportion of male participants was much higher than expected, which they said is a possible avenue for future research.

Although this research demonstrated the viability of Stand Tall, there were limitations to the study. The sample size the research team used was small, and there is a possibility of bias due to the way participants were selected. The study was intended as a first step for testing the intervention’s viability, and the researchers caution that it should not be considered an assessment of how effective it is at reducing fall risk. Future trials with different designs and larger samples will be needed to fully investigate Stand Tall’s effectiveness, explore its usability and functionality and see how adding education and behavior aspects would affect the exercise program.

Despite these limitations, this work shows that virtual training programs like Stand Tall have promise for reducing fall risk among older adults. With further research and refinement, such programs will likely valuable tools for physical therapists and other medical providers to help the growing population of older adults live healthier as they age.