Training tomorrow’s doctors: How to help when healing stops

Twenty or so second-year students, or M2s, are sitting around four pushed-together tables in a training room at the Texas A&M Health Science Center Clinical Learning Resource Center in Bryan. The air is relaxed but expectant; this is not a test but a training opportunity, and a “rough draft” at that.

First-year medical student Jorge-Jayme Montes discusses an actor-patient’s terminal illness, and what care options are available, in a simulated patient encounter at the TAMHSC-College of Medicine while first-year students Elizabeth Coffee (second from left) and Sharddha Dalwadi look on. Simluated patient encounters are observed live via a video feed and students are given immediate feedback on their communication skills, as well as reviewing their recorded encounter later to critique their own performance.

The College of Medicine has been instructing students on palliative, or “end-of-life” care—the care patients receive for terminal conditions, where the goal is to comfort and ease pain rather than to cure—for years. But with the help of second-year students Charis Santini and Georgina De la Garza, the college will now offer students the chance to practice the doctor’s challenging role in such care: Delivering devastating news to patients and their loved ones, and telling patients what comes next when there is no curative path forward.

(You can learn how a real-life caregiving challenge sparked De La Garza’s interest in developing palliative care training, and how she and Santini tackled the challenge, in Part 1 of this series.)

Students’ questions draw out the ground rules. How thorough should their examination be? (A “focused head-to-toe.”) Should they state out loud whatever they’re observing or concluding during diagnosis, so the observers monitoring them on the video feed can assess their history-taking? (Yes.) How long will they have? (Ten minutes.) Their primary concerns are logistical and fact-based.

Dr. Craig Borchardt, assistant professor in the medical school’s Department of Humanities in Medicine and the head of Hospice Brazos Valley, cautions them the hardest part of this exercise, and its real-world counterpart, will be dealing with a patient’s emotions and managing their own emotional response. “What you will be dealing with is people who are transitioning from hope to grief,” he tells them.

In another training room, Dr. Steve Moore, a hospice volunteer and physician, is speaking to another group of M2s about how to deliver news to a terminally ill patient, or to a family member whose loved one has died in the hospital. His advice is a checklist of a dozen or more hard-won truths learned from years of grief counseling, as well as the intimate, personal experiences of loss that separate most of the old from most of the young.

If they are giving notice of a death, “no euphemisms,” Dr. Moore says firmly. “Someone has died. We also need to be culturally sensitive. Not everyone who comes into the hospital and dies is Judeo-Christian. Euphemisms like ‘passed on’ presume a certain range of beliefs and comforts. Don’t make assumptions.”

He ticks off a few more items, and warns against “trying to comfort by explaining what you don’t know”—reminding students they may have to deliver bad news even when they weren’t on scene when it happened. “We don’t always know why people die,” he said. “We may know that they had a particular illness and that they weren’t responsive to a particular medication.… But don’t extrapolate beyond what we really know. Don’t make up an answer.”

He tells them to locate the box of tissues in the room, and get it before sitting down. “You don’t want to get up and walk across the room after delivering the news.”

A student tentatively raises a hand. “Do we really want to walk across the room and bring the Kleenex back and set it in front of them before we tell them what happened?”

Students laugh, but Dr. Moore doesn’t crack a smile. “I wouldn’t put it in front of them, but I would get it,” he says.

And with that, students pair off and begin heading to the examination rooms, where their patient interactions will be observed by a team of nurses, chaplains and hospice workers and given written feedback on their performance.

As students finish sessions in teams of two, they wander back to the training room, where they wait with those who haven’t yet completed the scenario. They report to the mentors on the few bugs several groups seem to be encountering—where a folder is placed and how it should be used, or running out of time before they’ve even completed their exam. They avoid discussing their patients in detail but share tips, speaking in small clusters, overhearing each other and swapping impressions.

“She said ‘So I have six months to live?’” says one student. “I didn’t really know how to answer that. ‘Statistically, yes?’”

“I told my patient the prognosis was just a guess,” another student chimes in from a few seats away. “I also told him that you might live longer, and that hospice patients do tend to live longer.”

“My patient was almost more concerned about her husband than about herself,” says Antonio Toribio. “She was so concerned about how he’d react. So I offered to talk to her husband—we set up an appointment for next week, for him to come back with her and I could walk them both through it all, so she wouldn’t have to go home and fight with him about it.”

In the observation room, chaplain Skip Stutts watches a medical student stumble through giving a death notice to a patient’s family member. “How they handle themselves instinctually in this situation is as much about them, the doctor, as it is about the patient.”

Students have to self-reflect to gauge their own emotional and linguistic crutches and compensate for them. They also have to work out the practical mechanics, the rhythm, of delivering bad news—what words to use, in what order, and how and when to offer a comforting touch. Some students talk for so long about the details leading up to the death before even saying the patient had died, it seems as though they’re subconsciously avoiding it. Others blurt it out as they’re sitting down, and then struggle to provide needed detail after the patient has started crying or turning inward.

Although De la Garza and Santini wrote the scenarios, Laura Livingston, who manages the Clinical Learning Resource Center, scripted the emotional responses in broad strokes for the patient actors to interpret. One woman, told that her preschool daughter died in the hospital after she’d been told it was safe for her to leave for an hour or two, retreats to a corner of the room and crouches to the floor, sobbing. Watching this scenario several times yields multiple student responses: some hover, or pace, or sit awkwardly nearby, while others instinctively crouch down next to her, hold her and reestablish eye contact.

At the end of the exercise, students and patients alike are debriefed, in separate groups. For students, the challenge has remained largely technical; they’ve learned a lot today, but the harshest instruction will come when they receive written feedback and review their recorded encounters. Patients’ debrief is largely an emotional check-in; after acting out the same trauma 10 times over in a few hours, Livingston says, “It can take an emotional toll. We have to be pretty careful.”

De la Garza and Santini seem pleased with the experiment. De la Garza says the exercises were challenging for them, too—they had written so many cases, and there’s a big difference between imagining how you’d like to respond and doing it. They also had no idea how patients would react to the news. “Being there in that room, every reaction is so unexpected,” De la Garza says.

She’s come a long way since her grandmother’s death last summer, and her journey’s still just beginning. With her first licensing exam to prepare for, followed by two more years of clinical education and then residency training, she surveys the room of students and staff and reflects on what she and Santini have accomplished with the hospice team. Abuela would be proud.

“I believe every physician, regardless of specialty, should be able to determine when they’re doing more harm than good and refer their patients to get palliative care,” De la Garza says. “Everyone deserves to have a dignified death.” 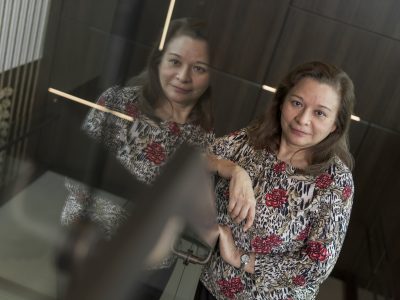