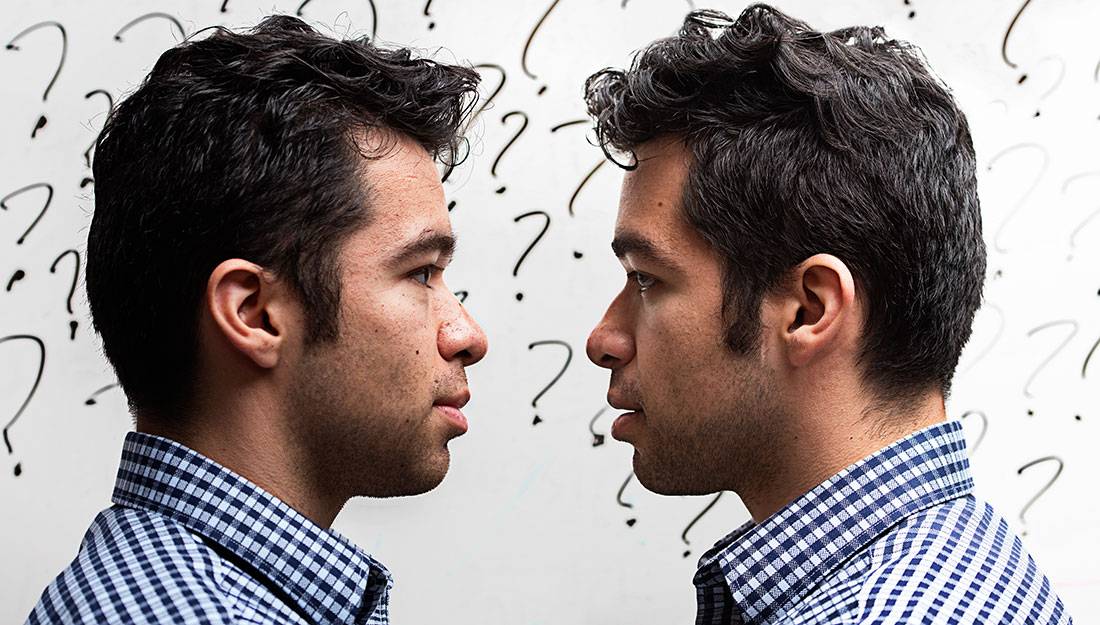 You Asked: What causes déjà vu?

Glitches in the brain or a glimpse into the future?
April 13, 2016
Facebook0Tweet0

You walk into a room and suddenly your brain goes fuzzy with an overwhelming wave of familiarity—although this is a totally new experience. Like something out of a sci-fi plot, it almost seems as if you’ve walked into the future.

Chances are, you’ve experienced this situation, known as déjà vu, during your life. Déjà vu (French for ‘already seen’) occurs in approximately 60 to 80 percent of people—a phenomenon that’s almost always fleeting and may manifest at any time. Despite wide-spread coverage, bursts of déjà vu are still misunderstood by the scientific community.

“Because there is no clear, identifiable stimulus that elicits a déjà vu experience (it is a retrospective report from an individual), it is very difficult to study déjà vu in a laboratory,” said Michelle Hook, Ph.D., assistant professor in the Department of Neuroscience and Experimental Therapeutics, at the Texas A&M Health Science Center College of Medicine.

A glitch in the brain?

“According to many studies, approximately two-thirds of individuals have experienced at least one episode of déjà vu in their life,” Hook said. “Understanding how memory storage works may shed some light on why some experience it more than others.”

While déjà vu’s connection to the temporal lobe and memory retention is still relatively unknown, clues about the condition were derived from people who suffer from temporal lobe epilepsy (a condition in which nerve cell activity in the brain is disturbed—causing seizures). Findings suggest that déjà vu events may be caused by an electrical malfunction in the brain.

Epileptic seizures are characterized by dysfunctional neuron (nerve cell) activity across the brain which disrupts the electrical impulses that ‘fire’ neurons. These impulses can spread across the whole brain—inducing seizures. “

“Clinical reports published in Epilepsy Research and Treatment by researchers at the University of Leeds show that some patients who suffer from temporal lobe epilepsy report experiencing déjà vu, almost as a sort of warning, before an epileptic seizure event,” Hook said.

But, what is the basis for déjà vu in healthy people without epilepsy? Some researchers describe it as a ‘glitch’ in the brain—when the neurons for recognition and familiarity fire—allowing the brain to mistake the present for the past. In fact, the same abnormal electrical impulses that contribute to epilepsy can present in healthy people. An example of this is a hyponogogic jerk (an involuntary muscle spasm that occurs as a person is falling asleep).

Instances of déjà vu in healthy individuals may also be attributed to a ‘mismatch’ in the brain’s neural pathways. This could be because the brain is constantly attempting to create whole perceptions of the world around us with limited input.

For example, it only takes a small amount of sensory information—like a familiar smell—for the brain to create a detailed recollection. Déjà vu could be linked to discrepancies in the memory systems of the brain, leading the sensory information to by-pass short-term memory and reach long-term memory instead. This may produce the unsettling feeling that we’ve experienced a new moment before.

In the visual system, sensory information travels through multiple pathways to the higher cortical centers of the brain (areas that play a key role in memory, attention, perception, awareness, thought, language and consciousness), with all information reaching those centers at or around the same time.

“Some suggest that when a difference in processing occurs along these pathways, the perception is disrupted and is experienced as two separate messages. The brain interprets the second version, through the slowed secondary pathway—as a separate perceptual experience—and thus the inappropriate feeling of familiarity (déjà vu) occurs,” Hook said.

According to Hook, there is still much to learn about déjà vu and the mechanisms behind it. “There may not be a simple answer for the mechanisms behind déjà vu yet, but, with further research and studies, conclusive evidence for the phenomenon may be discovered in the future,” she said. Wouldn’t that be like experiencing déjà vu all over again?