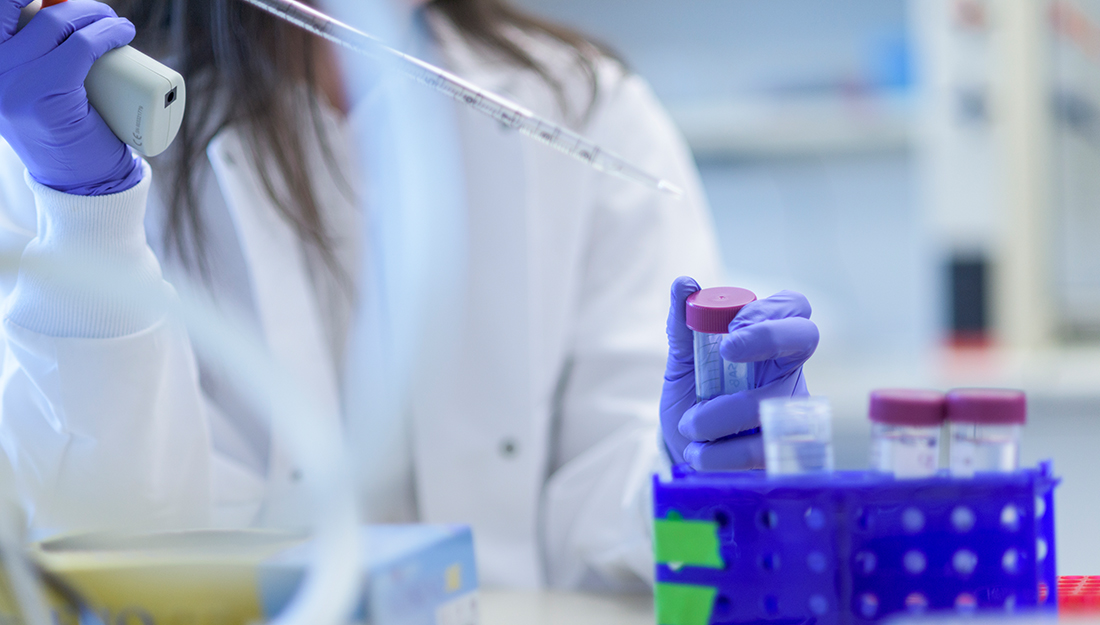 A new way to diagnose diseases

A new method can distinguish if a protein is misfolded and may be useful in a variety of diseases, from cancer to Alzheimer's
June 7, 2018

Proteins in the body need to be perfectly arranged, or folded, to do their jobs. When there is a misfolding, a number of problems and diseases—including diseases of aging and different cancers—can result. A new method, developed by a team led by Yubin Zhou, PhD, associate professor, and Yun Nancy Huang, PhD, assistant professor, both at the Texas A&M Institute of Biosciences and Technology, can examine protein assembly in real time, in living cells, to find problems with assembly and diagnose the resulting diseases.

This research is published in Chemical Science, the Royal Society of Chemistry’s peer-reviewed flagship journal, and is free to read.

Proteins are organic molecules made up of different combinations of 20 amino acids, the building blocks of life. For any given protein, the amino acids must be joined together by chemical bonds and then folded properly, in single copy—called a monomer—or multiple copies, called an oligomer, to execute the protein’s function within cells.

Nearly a third of the proteins in the human body are assembled as oligomers to perform their biological tasks. Haemoglobin, for example, must be assembled as a tetramer (a specific type of oligomer with four units) to most efficiently transport oxygen through the blood stream. A disruption of haemoglobin’s assembly would compromise the uptake of oxygen into cells, potentially causing damage to cells throughout the body due to lack of oxygen. That’s where Zhou’s new study comes in.

“We developed a novel method to examine protein assembly in real time and to dissect the structure-function relations in living cells. Normally this is done in test tubes,” Zhou said. “Our study meets the urgent and critical need for quantitative assessment of protein structure and monitoring of protein actions under native conditions.”

Zhou calls the engineered, genetically encoded mini-tags MoTags, which is short for monomer/oligomer detection tag. They are able to tell how many units are in the protein, which the researchers can then compare to how many there are supposed to be in that particular protein—and therefore determine if there is any misfolding.

It is thought that misfolding of proteins, which naturally happens during the aging process as proteins are damaged, can cause some of the major diseases associated with aging, from cancer to Alzheimer’s and Parkinson’s. Therefore, a method that can quickly tell if a protein is inappropriately assembled in real time, in living cells, will not only help scientists to better understand the pathogenic mechanisms, but also aid the diagnosis of disease and possible treatments.

This method can be repurposed to screen for drugs that can correct the misfolding or mis-assembly of disease-causing or disease-associated key proteins. “In addition to protein structure-function relationship studies, our approach can detect protein to protein, protein to DNA or protein ligand to drug interactions,” said Guolin Ma, PhD, a postdoctoral fellow in Zhou’s lab who spearheaded the work. “Therefore, the live-cell screening assays against these interactions can be set up based on our method.”

“Our method can be widely adopted by any laboratories equipped with a standard fluorescence microscope to study protein chemistry, and thus is suitable for a broad application in the fields of protein chemistry, chemical biology, biochemistry research, as well as the development of assays to aid drug screening and therapeutic development in the near future,” Huang said. “Our simple methods have straightforward readouts and circumvent laborious protein expression and purification procedures. We are thrilled the broad adaptability and wide applications of MoTags in biomedical research, as well as the potential for transforming the way biochemists to study their pet proteins.”

About the Royal Society of Chemistry

The Royal Society of Chemistry is the world’s leading chemistry community, advancing excellence in the chemical sciences. With over 54,000 members and a knowledge business that spans the globe, we are the UK’s professional body for chemical scientists; a not-for-profit organisation with over 175 years of history and an international vision for the future. We promote, support and celebrate chemistry. We work to shape the future of the chemical sciences – for the benefit of science and humanity. Find out more at www.rsc.org

Chemical Science is the flagship journal of the Royal Society of Chemistry and publishes findings of exceptional significance from across the chemical sciences. It is a global, peer-reviewed journal for the discovery and reporting of breakthroughs in basic chemical research, communicated to a worldwide audience without barriers, through open access. All article publication charges have been waived, meaning that the journal is free to read and free to publish. Find out more at rsc.li/chemical-science

About Chem Sci Pick of the Week

Each week the Royal Society of Chemistry is releasing one embargoed story from their flagship journal Chemical Science, highlighting the cutting-edge work they publish. If you wish to be added to the distribution list, please email pressoffice@rsc.org. Follow #ChemSciPicks on Twitter.