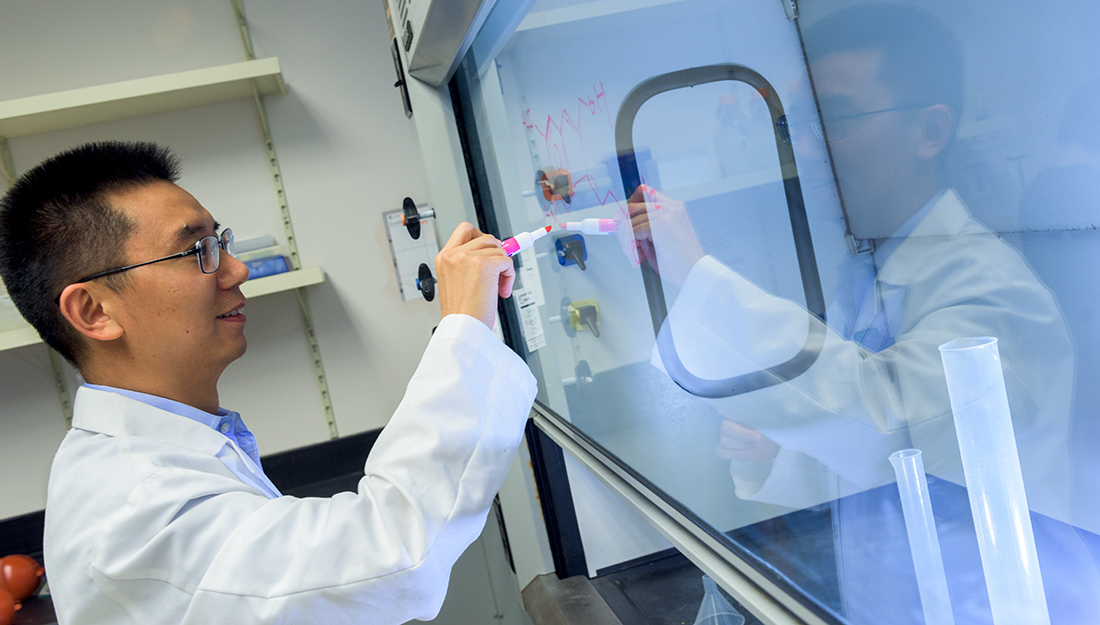 Glioblastoma (GBM) is among the most common and malignant types of primary brain tumors in adults, and one with a poor prognosis. The tendency of this type of tumor to aggressively and widely spread through the brain makes it nearly impossible to completely remove the cancer through surgery. And although a limited number of chemotherapy drugs have been approved to treat glioblastoma, the first-line treatments like the drug temozolomide often cause chemo-resistance, meaning the drug becomes ineffective against the tumor and any recurrences.

Yubin Zhou, PhD, associate professor at the Texas A&M Institute of Biosciences and Technology, and his team aimed to identify novel and potent anti-glioblastoma drugs by targeting the cancer development signaling pathways. Their findings, published in the journal Cell Chemical Biology, indicate that a compound called YZ129 may be effective in treating glioblastoma that has become resistant to other drugs.

“There is an urgent need to develop novel effective drugs for glioblastoma therapy in the clinic,” Zhou said. “To expedite this process, we set up a high throughput method using high-content imaging-based techniques to screen inhibitors that target various proto-oncogenic pathways in living cancer cells.”

In other words, he and his team ran through inhibitors of a number of cancer-related pathways to determine their effect on cancer cells.

The screening efforts were strongly supported by the High Throughput Research and Screening Center under the supervision of Clifford Stephan, PhD, research associate professor at the Institute of Biosciences and Technology.

In this study, Zhou and his team focused on a master regulator of gene expression called the nuclear factor of activated T-cells (NFAT). NFAT was first described as a key transcription factor for the activation of cells of the immune system, but has been recently shown to contribute to tumor growth and cancer progression in patients.

Abnormally high expression or overactivation of NFAT is often seen in multi-cancer types and particularly in cancer in advanced clinical stages. NFAT controls the expression of a set of downstream cancer-associated genes to promote tumor growth and malignant transformation.

After going through multiple rounds of screening, the team identified YZ129 as a promising lead compound. By collaborating with a medicinal chemist Minyong Li, PhD, at Shandong University School of Pharmacy, they further improved the efficacy of the compound.

“YZ129 proved to be potent in anti-glioblastoma activity that might provide alternative therapeutics for temozolomide-resistant tumors,” said Lian He, PhD, a postdoctoral researcher in Zhou’s lab. “YZ129, unexpectedly, not only suppresses NFAT-mediated gene transcription, but also directly inhibits the heat shock protein 90 (HSP90), a protein chaperone that assist the unfolding and folding of key macromolecules in cancer cells.”

Through a combination of chemical biology and biophysical approaches, the team described the underlying working mechanisms. They have shown that YZ129 imposed broad inhibitory effects on key cancer-associated pathways.

When YZ129 was injected in an animal model of brain tumors, the compound effectively curtailed glioblastoma growth and promoted cancer cell death. More promisingly, the team was able to see its therapeutic effects on tumors implanted in the brain, thereby attesting to the possibility that YZ129 might travel across the blood-brain barrier to take effect. In the clinical trials, a lot of drug candidates fail because of their inability to efficiently cross this barrier.