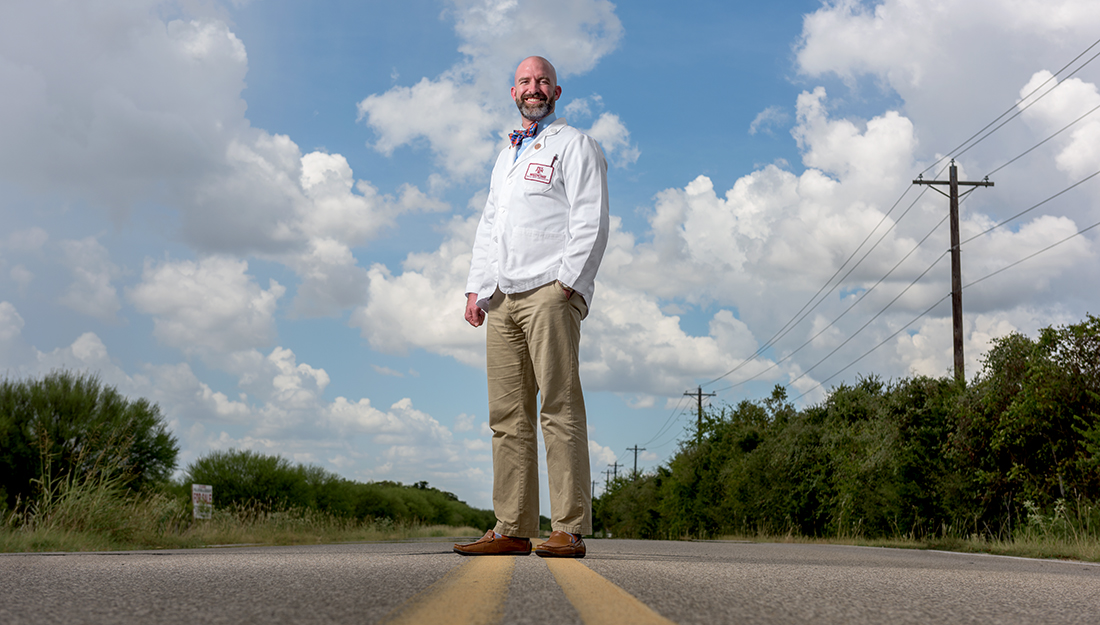 Dedicated to “more” for rural and underserved health care

Medical students don’t get much of a summer break. Like many schools across the country, at Texas A&M College of Medicine that break is just a few weeks between the first year and the second. Some students take some time off to travel. Some just rest after that stressful first year. During the summer break of 2018, Jared Laney spent his break in the rural Texas desert providing health care to refugee children at a shelter for immigrant children.

It’s not your average summer break. But then again, Laney isn’t your average medical student. He is a family nurse practitioner (FNP), a veteran and a bit older than the usual 20-something-year-old in medical school. Laney is fluent in Spanish and trained in medical Spanish. He is also a husband and father of two boys and two girls.

So what makes a man with two successful careers decide to go into one of the most strenuous programs in professional education? Laney put it quite simply: “I wanted to help people more.”

Laney grew up about 25 miles east of Los Angeles, California. At 19, after a year spent at the local community college, he went on a two year mission trip to Santiago, Chile.

“A bunch of weird things started happening as soon as I arrived in Chile,” Laney said.

Laney found himself in a series of circumstances that showed him the value of expedient and quality health care. From an accident on a highway where he rendered aid until paramedics could arrive, to witnessing a girl get hit by a truck while on her bike, opportunities to help “just kept happening.”

“Another night, a traveling carnival was coming through our town and a bunch of kids climbed on a Ferris wheel. We told them they’d better get down as we walked by on our way to an appointment, and on the way back, sure enough, there was an ambulance there with the carnival crew tending to one of the kids who had fallen,” Laney said.

These things just kept happening. There was another circumstance that really hit home for Laney. One evening, he was at home—which at the time was a rented room in a house. The landlord came in yelling that there was something wrong with the neighbor.

Laney and his mission trip companion ran with the landlord next door to find a woman lying unresponsive on the couch, with only a towel draped over her. She had collapsed in the shower and no one knew why. The woman was in her early 30s, and her family, including a very young daughter, were all in the room.

Laney knew CPR. The woman had no pulse and wasn’t breathing. They laid the woman on the floor and instructed the landlord to call for an ambulance.

“We tried for a long time to get her to respond, but it wasn’t working,” Laney said. “That ambulance never came.”

The family ended up putting the mother in the back of a van and racing to the nearest clinic. Laney continued to do CPR as they drove, but the woman was pronounced dead at the hospital.

He never knew the cause of her death and will never know whether a more expeditious intervention would have made any difference. But the potential for negative patient outcomes when access to care is limited will always stay with him.

The incidents didn’t stop there. Laney was the first person to come across a man who crashed his bike and was seriously injured. Another morning, he was the first to find a man lying on the side of a street. He was mugged the night before while he walked home and was suffering from the serious injuries inflicted by the perpetrators.

“I wish I’d known more to help these people, and I tried the best I could,” said Laney. “I knew I couldn’t fix the country’s systems, or their economy, but I knew I could help the individuals who came across my path. I loved all of the opportunities to render aid, but each time I left a little bit frustrated, wishing I could have done more to help them.”

The path to medical school

When he got back to the states, Laney began thinking about the medical field as a profession. To test the waters, he enrolled in an Emergency Medical Technician program at a local community college and loved it.

He knew he wanted to pursue medicine as a career. However, he felt that the traditional route of an undergraduate science degree and then straight on to medical school would not provide him the level of clinical exposure he desired. He would go to medical school, but become a nurse along the way.

While in nursing school he met his wife, Laurel, and life had a few more stops before Laney would find himself in medical school. They included nurse practitioner school at Johns Hopkins University and time serving his country in the United States Air Force.

The Laneys had two children at the beginning of nurse practitioner school and another at the end. Right after earning his FNP degree, Laney entered Commissioned Officer Training, and the family moved to San Antonio after Laney was assigned to the Air Force’s 59th Medical Wing.

The desire to attend medical school remained for Laney. Once his commitment to the Air Force came to an end, he began the process of applying to medical school. Working full-time with three children and his wife on bedrest with a complicated fourth pregnancy made the application period more challenging than he would have liked, but he knew medicine was where he needed to be.

After the Air Force, he had the opportunity to work as a nurse practitioner in a variety of settings, mostly with underserved populations. In 2016 and 2017, Laney worked at an overflow shelter for unaccompanied minor immigrants along the Mexico border.

“It was an incredible experience, and my favorite as a nurse practitioner,” Laney said. The shelter had a maximum capacity of about 3000 children. “In an emergency or disaster setting there is a real, legitimate need for your services. Being able to fill that void for those who are most in want, to be able to help them and possibly fix their physical problem is very rewarding.”

He is also now one of three students leading the Shift 2018 Health Challenges Case Competition for Texas medical school students. The event aims to bring together the brightest minds from the twelve Texas medical schools to find solutions to the healthcare challenges faced by rural Texans.

“If we can think about these things creatively and get this next generation of physicians thinking differently about getting health care where it is desperately needed, we can come up with new solutions to old problems that continue to get worse,” Laney said.

Rural populations face dire situations in accessing health care. It’s a conglomeration of economics, culture, accessibility, language barriers, education barriers and health care system limitations. It’s a daunting problem, and Laney believes that medical students may be one of the untapped resources for the state and nation’s rural health care.

“I don’t think I’ll ever stop feeling like ‘I need to help more,’ in medicine,” Laney said. “There is something about seeing what happens when adequate health care isn’t available. Whether in Chile or in Texas, the effects are the same—it sparks something inside you to do more, to be more.”