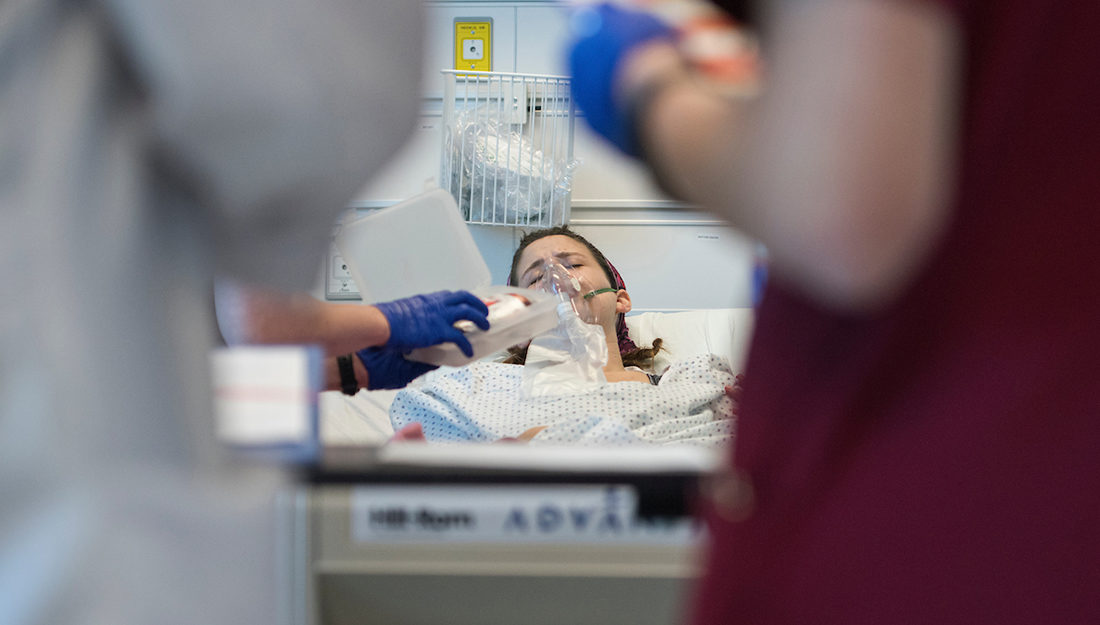 Treating people with COVID-19 has presented challenges in both patient care and health care worker protection. Shortages of critical care beds, ventilators and personal protective equipment (PPE) as well as a lack of clear guidance on PPE use and reuse have led to stress and uncertainty, but they have also driven innovation around the world. One such innovation is being produced and tested by experts within the U.S. Defense Health Agency, and one of those experts cites the lessons he learned inside and outside of the classroom at Texas A&M University as being crucial.

Maj. Douglas Ruhl, an otologist and clinic chief in the Ear, Nose and Throat (ENT) clinic at Madigan Army Medical Center in Washington state, is one of the many military and civilian Department of Defense (DOD) personnel working on a prototype device known as the COVID-19 Airway Management Isolation Chamber (CAMIC). The device can assist healthcare providers with additional treatment options while keeping those treating patients safe from infection. Physicians, engineers and others at Madigan and Walter Reed National Military Medical Center near Washington, D.C., as well as at various other DOD facilities, have been working with computer models and physical prototypes to develop the device.

The practice of early intubation (inserting a breathing tube into a patient’s throat to enable a ventilator to be used) has been the subject of some debate throughout the pandemic, said Ruhl, a former member of the Texas A&M Corps of Cadets who graduated with an undergraduate degree in genetics in 2003 and earned a master’s of science degree in public health with a focus on epidemiology from the Texas A&M School of Public Health in 2006. 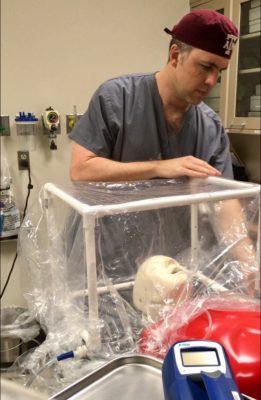 Texas A&M School of Public Health graduate, Maj. Douglas Ruhl, is helping develop a device to contain the environment around COVID-19 patients to allow for more treatment options such as high-flow oxygen.

“It was initially thought that early intubation might be better,” Ruhl said. “But this skips intermediate steps like high-flow oxygen.” However, many of those intermediate steps can cause the disease to spread to care providers more easily by aerosolizing virus particles. This is in part what drove teams at both hospitals to create the device. “We wanted to see if there was a way to contain the environment around the patient” so providers could safely administer these intermediate steps before moving onto intubation, Ruhl said. This device can also add a layer of protection when performing certain surgeries.

The device consists of a frame made of ordinary plastic pipe covered with plastic sheeting, but the simple appearance belies a complex operating design. An air or oxygen line is connected to one side while a vacuum line is connected to the opposite end of the device. This enables a smooth and regular flow of air or oxygen across the patient while keeping aerosolized particles safely contained. Using a simple design and commonly used materials like PVC pipe means that the device could be produced quickly and cheaply.

In the early stages of the COVID-19 pandemic, Ruhl had an understanding of what was happening and how quickly the disease could spread due to his epidemiology studies at the School of Public Health. He was able to use this knowledge to inform the leadership at Madigan. Soon after, he was tapped to lead the team at Madigan as part of a multi-hospital and multi-agency effort. Ruhl said the device generated a lot of interest and cooperation within the DOD and was the cause of many sleepless nights. With working prototypes at both Madigan and Walter Reed, the next steps are further testing and efforts to make the design even easier and less expensive to build. The teams are also pursuing emergency authorization from the Food and Drug Administration and are looking to make it so people can assemble the device on their own.

Accurately predicting the future is difficult, but it seems clear that COVID-19 is not going away any time soon. “We don’t know if we’re out of the woods yet,” Ruhl said. “We’re not sure about immunity, and a vaccine could be a long way away.” However, the device Ruhl helped develop is something that could help overwhelmed hospitals, especially in parts of the world with less developed health care infrastructure. He also noted that the device would be useful when dealing with other diseases such as Ebola, SARS or tuberculosis. “There are definitely applications in hot spots around the world,” Ruhl said.

Throughout his career and during this crisis, Ruhl has leaned on his experiences as an Aggie, especially those that taught the value of leadership. “I’ve been happy to lead my section,” Ruhl said. He also noted that it is vital to pay attention and look for opportunities around you. “As Aggies, we strive to lead and fill voids as the need arises.”