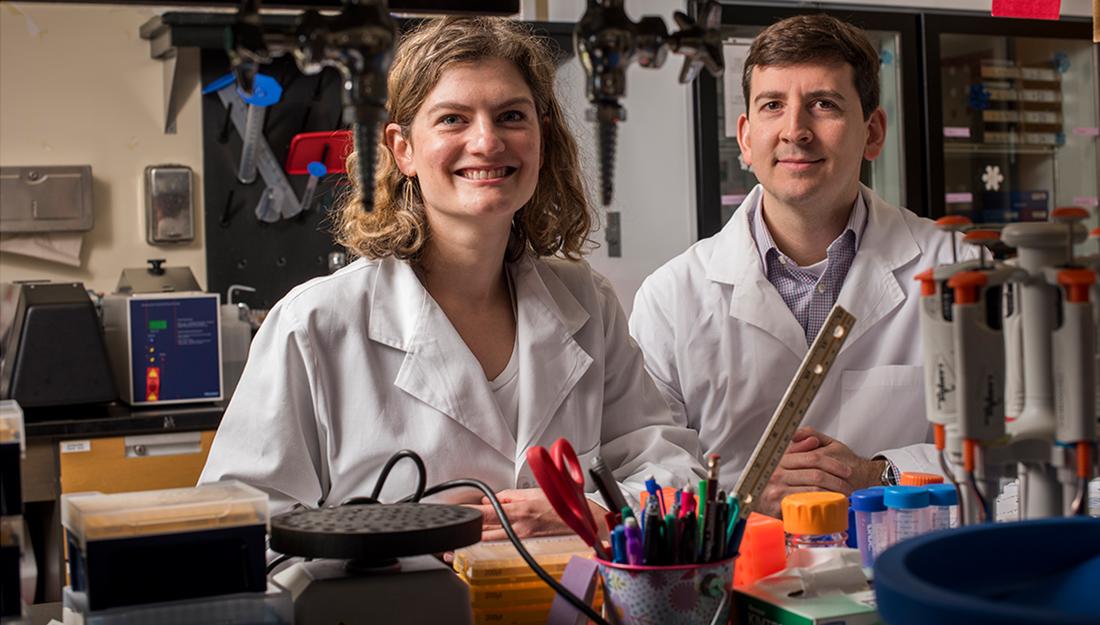 How a husband-and-wife research team are studying the health effects of these important organelles
April 12, 2018
Facebook0Tweet0

Structures within body cells called mitochondria are the ‘power plants’ of the cell, turning glucose and other dietary fuels into energy the body can use. Many of us remember this from our high school biology classes—but it turns out that there is far more to these organelles than we ever knew. Mitochondria play essential roles in many cellular pathways, and when they stop functioning normally, they can contribute to diseases such as diabetes, autoimmunity and cancer.

Often, new insights can come from partnerships. New ways at looking at common biomedical components often come from unique collaborations—but it isn’t that often that they come from husband and wife teams. Phillip West, PhD, assistant professor, and Laura Ciaccia West, PhD, research assistant professor, both in Department of Microbial Pathogenesis and Immunology in the Texas A&M University College of Medicine, study a diverse array of cell and animal models to investigate how mitochondria influence human health and disease. They’re combining their expertise to discover the full potential of mitochondria.

“We now appreciate that mitochondria do much more than just make energy,” West said. “If we can better understand these organelles and the many cellular pathways they impact, we may identify new therapeutic targets to improve human health.” Even in conditions where mitochondrial dysfunction is not the primary cause of a given disease, West believes it can play a major role. “It’s like dumping gasoline on a fire,” he said. “Mitochondria may not have started the fire, but they can serve as accelerants.”

Ciaccia West has a background in cancer research and immunology, so she focuses on how instability of the DNA in mitochondrial influences melanoma growth. This instability can be caused by ultraviolet radiation, among other possible triggers. This goal of work is to define how mitochondrial DNA instability and its downstream effects suppress the immune system’s antitumor activities. Its success helped the research receive a $199,795 High Impact High Risk Award from the Cancer Prevention and Research Institute of Texas (CPRIT) in 2017.

“Mitochondria have been well recognized as being important in the development of cancer,” Ciaccia West said. “Our research will provide additional insight into these processes, which may eventually lead to new therapies for melanoma and other cancers.”

In addition to this research, Ciaccia West teaches medical students as a course director for Introduction to Disease, a pre-clerkship course at the College of Medicine, and serves on the curriculum committee. This year, she was selected as a Leadership Education and Development (LEAD) Fellow, a certificate program from the Association of American Medical Colleges.

Meanwhile, Ciaccia West’s husband approaches mitochondria through his background in immunobiology. He studies the innate immune system—the body’s first line of defense against infection. “When I was in graduate school, we were studying a protein that we thought was in the cytoplasm of the cell, but was actually in the mitochondria,” he said. “Ultimately, my graduate research led me deep into the realm of mitochondrial biology, and my postdoctoral research focused largely on how mitochondria impact immune signaling and responses to microbial infections.”

West recently received pilot funds from the HHV-6 Foundation through the 2017 Dharam Ablashi Research Fund that he will use to generate additional preliminary data for a larger proposal to the National Institutes of Health. Human herpes virus-6, or HHV-6, is the primary cause of the pediatric illness roseola infantum, but has also been linked to more severe conditions such as epilepsy and viral encephalitis. “We will explore the novel hypothesis that HHV-6 disrupts mitochondrial function by altering mitochondrial gene expression and energy production, leading to metabolic and signaling imbalances,” West said. “These changes may influence cellular equilibrium and immunity against HHV-6.”

In addition to their role generating energy, mitochondria are important modulators of inflammation, which is a key feature of a number of different human diseases. Mitochondria evolved from bacteria before they came to be within mammalian cells, and their internal components still look bacterial in many ways. Therefore, when they are damaged and release their contents, the body’s immune system sometimes detects them as foreign invaders. This can trigger inflammatory responses, which often have damaging side effects.

“There’s a lot of excitement about this process and its implications in human health,” West said. “Therapies to boost mitochondrial function may not only increase healthy metabolism, but could also lower inflammation driven by the spurious release of mitochondrial contents.”

Along these lines, West and Ciaccia West are working with Ashok Shetty, PhD, in the Department of Molecular and Cellular Medicine and the Institute for Regenerative Medicine, on a Department of Defense-funded study to investigate how mitochondrial dysfunction contributes to the pathobiology of Gulf War illness (GWI). This debilitating condition affects greater than 25 percent of the veterans of the first Gulf War, and similar symptoms of memory loss and fatigue are appearing in veterans of more recent conflicts in Afghanistan and Iraq. There is currently no approved therapy to alleviate the symptoms of GWI, but mitochondrial dysfunction and inflammation have both been observed in these veterans. West believes that targeting mitochondria might provide a therapeutic breakthrough. His team is now exploring a pre-clinical model of GWI to test if a lipid-lowering medication can improve GWI-related symptoms. “This particular drug works by decreasing inflammation and boosting healthy mitochondrial function,” West said. “And since it’s already approved by the Food and Drug Administration, positive results in our GWI study could quickly lead to a clinical trial for this veteran population.”

These are the sorts of complicated problems that West and Ciaccia West are tackling together. “We can explore questions in which we both have expertise, but we can also utilize our unique backgrounds to more broadly advance research,” West said. “The overarching goal of our lab is to better understand the mitochondrial etiology of disease and aging, which will hopefully lead to new avenues for therapeutic intervention to improve human health.” 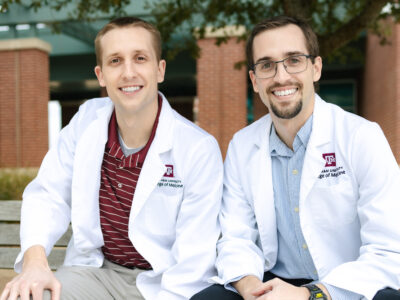