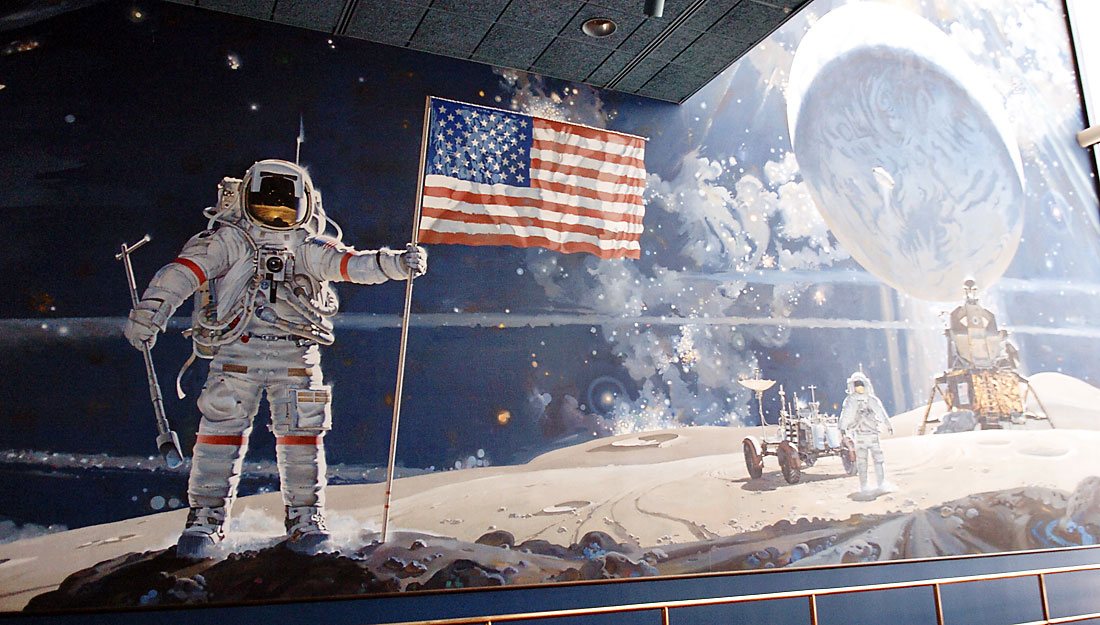 Astronauts get to experience things no other humans do, like see Earth from afar, travel where no other humans have been and make new discoveries. But while spaceflight offers priceless intellectual advancements, the weightlessness of space can have negative effects on astronauts’ bodies.

Through a series of fortunate events and a lot of hard work and dedication, researchers at the Texas A&M Health Science Center College of Medicine are collaborating with other Texas A&M University partners, including the Dwight Look College of Engineering and College of Education and Human Development’s Department of Health and Kinesiology, to find new medical discoveries in space. But it’s not just astronauts who benefit—these discoveries have the potential to unlock medical discoveries on Earth: in this case, inflammatory bowel disease and risks of cancer treatment.

Young scientists, led by David Zawieja, Ph.D., Regents Professor and interim chair of the Department of Medical Physiology at the Texas A&M College of Medicine, are working on research projects supported by the National Space Biomedical Research Institute (NSBRI) and NASA. The NSBRI, a unique, non-profit science institutional consortium established by NASA to ensure safe and productive human spaceflight, is working on countermeasures to the physical and psychological challenges humans face on long-duration missions.

Zawieja, who is also director of the Division of Lymphatic Biology at the College of Medicine, focuses his research on the lymphatic system, a component of the circulatory and immune systems pivotal for transporting fluids, large molecules, white blood cells and immune cell signaling proteins from all regions of the body through the nodes to the mainstream circulation. Problems with the lymphatic system can lead to a build-up of fluid (also know as lymphedema) and impairment of immune functions.

So what does that have to do with spaceflight?

A lot, as it turns out. Spaceflight and its accompanying microgravity cause a number of changes to the human body: bone and muscle loss, immune dysregulation, increased risk of cancer and changes to the cardiovascular system. Without gravity, the pressure gradients from top to bottom of a person are drastically altered. The lymphatic system is very sensitive to pressure gradients, and it is this concern that led Zawieja’s lab to focus on space research 12 years ago while working with Michael Delp, a cardiovascular physiologist now at Florida State University and a long-time NASA-funded investigator.

Anand “Sunny” Narayanan, a graduate research fellow, and Walter Cromer, Ph.D., a postdoctoral research associate, both trainees in Zawieja’s lab in the College of Medicine’s Department of Medical Physiology, are supported by and working on projects relevant to NSBRI’s research objectives. By investigating tissue samples from ground-based space analogue animal models and from spaceflight missions, they are furthering our understanding of the role the lymphatic system has in the context of spaceflight adaptations.

“Our lab group interacts with many groups without clinical backgrounds, which really opens us up for new research avenues,” Zawieja explained. “The beautiful thing about working with NASA and NSBRI is that this interdisciplinary model is already in place and accepted, so it works very well with our group for these types of research interests.”

Two heads are better than one: How Texas A&M is a unique proving ground for collaborative research

Narayanan, who has undergraduate degrees in mechanical engineering and biology, said he came to Texas A&M specifically because of the leading space life science researchers and the NASA/NSBRI-funded Mentored Research Graduate Program in Space Life Sciences (SLS).

Narayanan’s primary research interests include the effects of radiation—whether from spaceflight or clinical radiation exposure—on the lymphatic system and how that may cause damage as well as inflammation. This is an important area for a number of reasons. Firstly, radiation exposure becomes a greater issue when planning long-term trips to the moon and Mars because of the extended time outside the safety of earth’s atmosphere. Furthermore, radiation changes to the lymphatic system are relevant to cancer patients undergoing radiation therapy, as lymph nodes and the corresponding surrounding lymphatic vasculature are the primary sites of therapy in metastatic cancers.

Previously it was accepted that the lymphatic system was relatively resistant to radiation damage except at very high doses, but this group’s data show detrimental effects at much lower doses—like what an astronaut is cumulatively exposed to on a long mission, or what a cancer patient might receive from fractionated radiation therapy.

“If our research keeps going this way, we will have evidence for changes in the lymphatic system at low doses that have been ignored previously,” said John Ford, Ph.D., associate professor in the Department of Nuclear Engineering at the Dwight Look College of Engineering, “and we can then identify what exactly is being affected, and hopefully reduce the effects of radiation.” Ford, who teaches radiation biology as part of the NSBRI Space Life Sciences Training Program, is a close collaborator of Narayanan and Zawieja.

While helping Susan Bloomfield, Ph.D., professor of health and kinesiology and assistant provost of graduate and professional studies, and Harry Hogan, Ph.D., professor of mechanical engineering, on a former student’s dissertation project using a ground-based animal model of microgravity, Narayanan began seeing some unusual patterns in the animals’ digestive tissues. He consulted with Cromer, who studies the interactions between gastrointestinal inflammation and the lymphatic system function.

“Sunny’s collaboration with our laboratory has led to some very interesting parallel projects on bone health outcomes in inflammatory bowel disease, co-led by my senior student Corinne Metzger.  Interdisciplinary work can lead us down many interesting paths!” Bloomfield said, whose current collaborations grew from working together on the doctoral Space Life Science training program.

One discovery leads to another

Narayanan and Cromer found that the tissues from the digestive system were inflamed in the animals exposed to simulated microgravity. Because lymphatic dysfunction and inflammation go hand-in-hand, and because the inflammation was caused from environmental changes (not induced like in other models), this opened a door for another great collaboration.

“Damage to the digestive system means astronauts won’t be able to absorb what they drink and eat, exacerbating other issues that they experience while in space, including bone and muscle loss, immune system impairment and more. Figuring out these fundamental questions will help us get a better idea of what may happen and allow us to develop treatments that astronauts can use to keep them healthy in future missions,” Narayanan said. “This sort of research also has application towards basic biomedical questions and problems, with new treatments that could be developed and applicable in clinical settings here on earth.”

The discovery of these effects on gut inflammation led to Cromer’s recently awarded NSBRI post-doctoral fellowship. Through this discovery, Cromer hopes to eliminate major gastrointestinal dysfunction in astronauts.

“It is common for astronauts to have issues with muscle wasting and eyesight. But major gastrointestinal dysfunction, while less likely during short term spaceflight, would require immediate and severe medical treatment—which is pretty difficult in space,” Cromer said. “I hope my research can not only prevent it, but counteract it.”

Prevention and treatment of issues astronauts experience during spaceflight are critical components of NASA’s goal to send astronauts to Mars. Understanding and addressing the biomedical implications are crucial for maintaining operational success during any deep-space missions, and knowing holistically how changes in astronauts’ bodies are occurring is the first step to addressing spaceflight knowledge-gaps and possible risks.

Work done by these groups aims to address some of these “unknowns” by investigating novel hypotheses of how and why the physiological changes (like local inflammation) in one region in the body (such as the gut) may have implications to adaptations that are occurring in another (such as bone) through the lymphatic system.

“We’ve been looking mainly at the musculoskeletal system, primarily bone, but when you look at the tissues from the gut, like Narayanan and Cromer are, we’re seeing some unexpected things,” Hogan said. “These findings can help us find new relationships between different systems of the body, which could potentially reveal new opportunities for interventions and drug treatments for inflammatory bowel disease and osteoporosis.”

“We’re seeing how inflammatory bowel disease influences immunity through changes in lymphatic function, and even how it impacts bones by altering inflammation,” Cromer added. “Because of these reactions to spaceflight, we can relate these to immunity and food absorption—things we learn from that help us document information from an inflammatory bowel disease research perspective and how the trafficking of immune cells, fluid flows and pressures have implications for patients here on earth.”

Cromer explained that space is a rapid test-bed for therapies and could be a proving ground for developing treatments and therapies for gastrointestinal dysfunction.

“This opens up a whole new world,” Cromer said. “If we can do this in a manner that’s cost effective and safe, it can be tested in animals in space and then can be used with human subjects in space very quickly.”

“In my opinion, the most profound aspect of Zawieja lab’s research projects within and amongst our collaborators is not the paradigm-shifting discoveries we are making, but most importantly our success as a team that led to novel hypotheses through hard-work and open communication,” Narayanan said. “I’d like to see our success as an example for encouraging interactions amongst science, technology, engineering and medicine – I think it’s benefited not just myself and Walter [Cromer], but graduate and undergraduate students in our collaborators’ labs, too.”