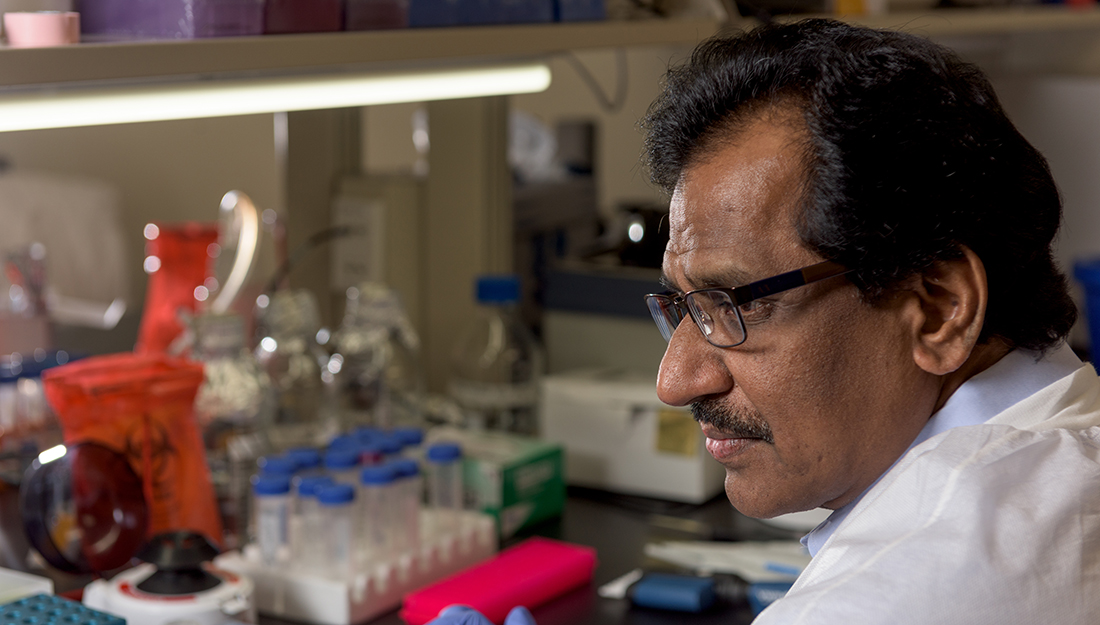 People with untreatable epilepsy may one day have a treatment: ‘convincing’ their own cells to become the neurons they need
December 20, 2018
Facebook0Tweet0

About 3.4 million Americans, or 1.2 percent of the population, have active epilepsy. Although the majority respond to medication, between 20 and 40 percent of patients with epilepsy continue to have seizures even after trying multiple anti-seizure drugs. Even when the drugs do work, people may develop cognitive and memory problems and depression, likely from the combination of the underlying seizure disorder and the drugs to treat it.

A team led by Ashok K. Shetty, PhD, a professor in the Department of Molecular and Cellular Medicine at the Texas A&M College of Medicine, associate director of the Institute for Regenerative Medicine and a research career scientist at the Olin E. Teague Veterans’ Medical Center, part of the Central Texas Veterans Health Care System, is working on a better and permanent treatment for epilepsy. Their results published this week in the Proceedings of the National Academy of Sciences (PNAS).

Over the last decade, scientists have learned how to create induced pluripotent stem cells from ordinary adult cells, like a skin cell. These stem cells can then be coaxed to become virtually any type of cells in the body, including neurons that use GABA, called GABAergic interneurons.

“What we did is transplant human induced pluripotent stem cell-derived GABAergic progenitor cells into the hippocampus in an animal model of early temporal lobe epilepsy,” Shetty said. The hippocampus is a region in the brain where seizures originate in temporal lobe epilepsy, which is also important for learning, memory and mood. “It worked very well to suppress seizures and even to improve cognitive and mood function in the chronic phase of epilepsy.”

Further testing showed that these transplanted human neurons formed synapses, or connections, with the host excitatory neurons. “They were also positive for GABA and other markers of specialized subclasses of inhibitory interneurons, which was the goal,” Shetty said. “Another fascinating aspect of this study is that transplanted human GABAergic neurons were found to be directly involved in controlling seizures, as silencing the transplanted GABAergic neurons resulted in an increased number of seizures.”

“This publication by Dr. Shetty and his colleagues is a major step forward in treating otherwise incurable diseases of the brain,” said Darwin J. Prockop, MD, PhD, the Stearman Chair in Genomic Medicine, director of the Texas A&M Institute for Regenerative Medicine and professor at the Texas A&M College of Medicine. “One important aspect of the work is that the same cells can be obtained from a patient.” This type of process, called autologous transplant, is patient specific, meaning that there would be no risk of rejection of the new neurons, and the person wouldn’t need anti-rejection medication.

“A great deal of research is required before patients can be safely treated,” Prockop said. “But this publication shows a way in which patients can someday be treated with their own cells for the devastating effects of epilepsy but perhaps also other diseases such as Parkinsonism and Alzheimer’s disease.”

Shetty cautioned that these tests were early interventions after the initial brain injury induced by status epilepticus, which is a state of continuous seizures lasting more than five minutes in humans. The next step is to see if similar transplants would work for cases of chronic epilepsy, particularly drug-resistant epilepsy. “Currently, there is no effective treatment for drug-resistant epilepsy accompanying with depression, memory problems, and a death rate five to 10 times that of the general population,” he said. “Our results suggest that induced pluripotent stem cell-derived GABAergic cell therapy has the promise for providing a long-lasting seizure control and relieving co-morbidities associated with epilepsy.”

This work was funded by a grant from the Department of Defense.